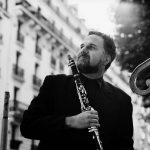 Clarinetist David Krakauer is the featured soloist in the New World Symphony’s program of Saturday, November 14 (7:30 pm) and Sunday, November 15 (2 pm) at the Lincoln Theatre in Miami.  He will take the solo role in Osvaldo Golijov’s moving and mystical Dreams and Prayers of Isaac the Blind for clarinet and string orchestra, heard in its area premiere.  Alasdair Neale, Principal Guest Conductor of the NWS, leads the orchestra in a program that also includes Prokofiev’s American Overture and Tchaikovsky’s Sixth Symphony.  Tickets are $78, $63, and $33, and are available through www.nws.edu.

Dreams and Prayers of Isaac the Blind, one of Osvaldo Golijov’s best-known pieces, is something of a signature work for Krakauer, who recorded it with the Kronos Quartet on Nonesuch in 1997.  Golijov grew up in an Eastern European Jewish household in Argentina, surrounded by chamber classical music, Jewish liturgical and klezmer music, and the new tango of Astor Piazzolla.  Dreams and Prayers is based on the teachings of the 12th-century mystic referenced in the title.

Says the composer, “Eight centuries ago Isaac The Blind, the great kabbalist rabbi of Provence, dictated a manuscript in which he asserted that all things and events in the universe are a product of combinations of the Hebrew alphabet’s letters: ‘Their root is in a name, for the letters are like branches, which appear in the manner of flickering flames, mobile, and nevertheless linked to the coal.’ His conviction still resonates today: don’t we have scientists who believe that the clue to our life and fate is hidden in other codes?

“Isaac’s lifelong devotion to his art is as striking as that of string quartets and klezmer musicians. In their search for something that arises from tangible elements but transcends them, they are all reaching a state of communion.”

Gramophone magazine, reviewing the disc, wrote that “Golijov uses the building blocks of music to tease the same cosmic mysteries in a work that echoes the joy and sorrow, the passion and reason of the entire Jewish experience.”  The Boston Globe has praised Krakauer’s interpretation as “an outstanding instrumental, emotional, and musical achievement.”

P A R I S ,   D E T R O I T ,   A N D   T H E   A P O L L O   T H E A T E R
David Krakauer comes to Miami directly from an extensive tour of France, highlighted by an appearance with the Orchestre Lamoureux in Paris, November 7 and 9. Following his appearance with the New World Symphony, he gives the world premiere of a new Concerto for Klezmer Clarinet and Orchestra by young Polish composer Wlad Marhulets, with the Detroit Symphony Orchestra under Leonard Slatkin, December 10 – 13. Remarkably, Marhulets (born 1986 in Minsk) is still in graduate school at Juilliard, studying with John Corigliano, who has praised him as “brilliant and uniquely talented.”

Marhulets calls the commission “a dream come true,” since it was Krakauer’s recordings that originally inspired Marhulets to become a composer and clarinetist. While studying at the Academy of Music in Gdansk, Marhulets aspired to someday come to NYC and perhaps meet Krakauer.  That quest resulted in the Concerto for Klezmer Clarinet and Orchestra.  Says David, “His music has the rare mix of tremendous craftsmanship, humor, vision and originality. In fact, it is rare indeed to run into someone so young whose original voice is already so clearly formed. Hearing his music for the first time was an astonishing and moving experience.”

Early 2010 brings the CD release of Abraham Inc., Krakauer’s acclaimed klezmer-meets-funk collaboration with trombonist Fred Wesley (a veteran of James Brown’s band) and accordionist/rapper/beat scientist Socalled.  Abraham Inc. made its live debut in May 2008 at the Apollo Theater, where “this endlessly surprising yet highly successful hybrid of klezmer, funk and hip-hop had the enthusiastic crowd – young and old, Jews and gentiles, whites and blacks – dancing ecstatically in the aisles like it was a Jewish wedding” (JazzTimes).

Krakauer describes Abraham Inc. as “a band where Jews play/write funky lines and African-Americans sing Hebraic chant (and vice versa).  This is a band that functions with each other on the highest level of mutual respect and understanding… And all of it in a natural and easy going way.” Audio and video clips at www.abrahamincmusic.com.