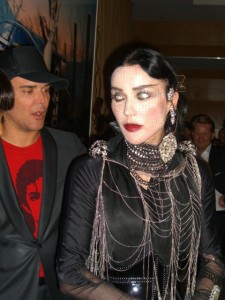 “She is the object of her own creativity. Her persona is her own masterpiece.”
_Daphne Guinness close friend, art historian, John Richardson.

A lengthy, slender figure floats through the hall of the Penthouse at the Raleigh on towering platforms, dressed in full-bodied black tights with spider like jewels dangling all over. On her arm she wore a silver metal arm, more like a piece of art, which she later told me she made herself.

Heads turned and mutters began, “It’s Daphne Guinness” as she made a spectacular entrance. As she walked through the room she kept asking, ” Where is David? Where is David?” Suddenly they found each other as if it were a reunion like that of Romeo and Juliet.

In an exclusive preview during Art Basel Miami Beach, December 5, 2009, David La Chapelle portrays Maybach Zeppelin, the high-end luxury automobile in which he chose Daphne Guinness to collaborate with to show the vehicle in his signature fashion. Like David said, the pieces are meant to be dreams not taken literally is simply what Daphne represents in those photographs, fantasy.

David photographed two motifs with the luxury automobile as its main focus. The towering beauty, Daphne was radiant in the two iconic photographs presented to the guests. The pieces focused on the Maybach Zeppelin limited special edition, and it’s historic predecessor from the 1930’s, the Maybach Zeppelin DS8.

The strikingly beautiful, Daphne Guinness was born in 1967, the daughter of the brewery heir Jonathan Guinness aka Lord Moyne and French beauty Suzanne Lisney. She was brought up in England and Ireland, and vacationed in Spain. She is the ex-wife of Spyros Niarchos, son of the wealthy billionaire Greek shipping tycoon, Stavros Niarchos and mother to Stavros Niarchos (ex-boyfriend of Paris Hilton).

She does not want for money, and she is devoted to her close friends and supports their cause, “I don’t do this for the money,” she says. “David is my best friend, and when he first called me, I told him how cool it was. At the time I was in Paris, and he told me to jump on a plane to LA and bring some clothes with me.” Throughout her marriage she had amassed a large collection of couture and designer pieces, so when she was summoned by David, she had no trouble in packing her garbs and headed for LA to do the shoot.

“She is the only person I know who brings her own couture to a photo shoot,” says David La Chapelle.

She is dubbed as the most well connected and fashionable woman in the industry. She is also very generous. “I feel very privileged in my life to have the friends I’ve had, the family I’ve had, and to be able to do the things I’ve done.” About 2 years ago, she created the Cathartic Experience, an auction where she auctioned 1,000 designer items bought during her marriage. She raised $158,000 for Womankind, a charity that deals with the political and domestic abuse of women worldwide. “It’s about giving back, it’s about doing things because you can,” she said.

As a devoted friend to David, she is also very fond of his work. “He is not only a friend, he is…the way he works, his vision, his knowledge, his art, his degree of friendship and his love. He is so full of love.”

The socialite who sits in the front row of couture shows and become muse for her designer and photographer friends, needs no promotion. She has emerged from her sheltered existence where her creative and unique sense of style has earned her the title, “Style Icon.” “I kind of just fall into it. I do my own, I make things my own, and I support my friends.” Making things herself is how she got involved in one of her recent projects. She has created a new limited edition fragrance, Daphne for Comme Des Garcons. She blends hints of amber, cypress, tuberose and orange. A limited edition of Daphne ($140) are available at Barneys New York, Jeffrey and Comme des Garcons boutiques.

The designer, stylist, writer, filmmaker, collector and perfumer has transformed her life into what she desires, fantasy. “Someone said to me once, “you should get a reality show.” I said, Are you kidding me? I don’t want reality, I want fantasy. I want the future, not now.”