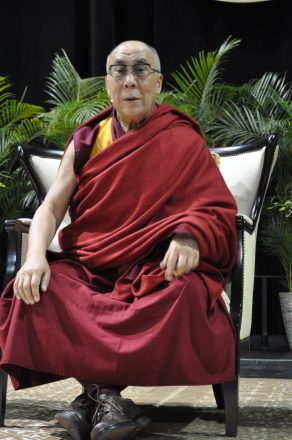 His Holiness the 14th Dalai Lama, Terizen Gyatso made several stops in  South Florida as a part of his  United States and Canada tour.

The purpose of the tour was to meet with leading scientists and educators at Stanford and Emory universities to engage in dialogues on the state of current research on empathy and compassion, the scientific study of meditation practices for cultivating compassion, and the implementation of such meditation programs in various clinical and educational settings.

Upon his arrival in Miami on Monday, October 25, 2010, the Dalai Lama attended a reception organized by the Florida International University’s Department of Religious Studies.

The following day, His Holiness appeared at the Temple Emanu-El in Miami Beach where he was entertained by Latin Grammy Award Winning flautist Nestor Torres. He later discussed “The Significance of World Religions” among representatives of the Jewish faith, the Catholic and Protestant churches, Islam, Hinduism, Jainism, Taoism and over 1500 guests.

The exiled Tibetan leader’s message was on “The Quest for Happiness in Challenging Times.” In the 11/2 hour long lecture, he addressed many topics including, religion, compassion for others, tolerance and respect. The lecture was also laced with light humor on his English and the former President of the United States.

Although he has great respect for the former President of the United States, President George W. Bush, he also expressed his disapproval with his policies.

His Holiness also told the audience that immediately following the lecture, he will depart for India.