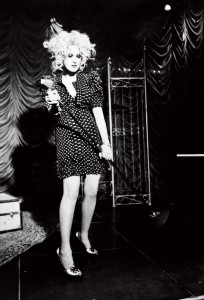 The Adrienne Arsht Center for the Performing Arts of Miami-Dade County proudly announces a one-night-only concert featuring the timeless pop music icon, CYNDI LAUPER. The Grammy Award-winning songstress appears at the Adrienne Arsht Center on August 3, 2010 at 8 p.m. in the John S. and James L. Knight Concert Hall. Tickets range from $39.75 to $63.75 and may be purchased through the Adrienne Arsht Center box office by calling (305) 949-6722, or online at www.arshtcenter.org.  Special VIP Four Packs are available for $600 and include four tickets to the performance, free valet parking, and entrance to the private Patron’s Salon with a full bar.

“Time after time, CYNDI LAUPER has touched audiences with her moving vocals, pop culture commentary and endearing comic flair,” said M. John Richard, president and CEO of the Adrienne Arsht Center.  “South Florida is in for a real treat when this star of stage and screen brings her fabulous voice and soaring spirit to the Knight Concert Hall.”

Ever since CYNDI LAUPER burst onto the world stage as the quintessential girl who just wants to have fun, her unique voice and irrepressible spirit have enchanted audiences around the globe.  After more than 20 years and global record sales in excess of 25 million, she continues to thrill fans with exciting new artistic projects.  Her upcoming album, Memphis Blues, is set to be released on June 22, 2010 – also her 57th birthday! – and features covers of classic blues songs with music luminaries such as BB King and Allen Toussaint.  CYNDI LAUPER’s appearance at the Adrienne Arsht Center spotlights her striking blues renditions plus the classic, audience favorites that made her the first female artist in history to have five top-ten singles from a debut album.

Nominated for 13 Grammy Awards, two Emmy Awards, two American Music Awards, seven American Video Awards, and 18 MTV Awards, CYNDI LAUPER boasts a tremendous career as a singer, songwriter, producer, and actress.  Most recently, she stole the show on the NBC hit “Celebrity Apprentice,” and is now set to launch her own reality series next season.  LAUPER has also made her mark on Broadway, in films, and famously penned the theme song for Steven Spielberg’s cult classic The Goonies.  LAUPER is currently at work on her autobiography and continues her advocacy work for lesbian, gay, bisexual, and transgender equality through her foundation, the True Colors Fund.