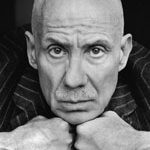 “I am a literary executor and an agent provocateur. I did what I did and saw what I saw and learned my way through to the rest of the story. Scriptural Pure Voracity and scandal red carcass, that conjunction gives it its sizzle. You carry the seed of Phillip within you already. You recall the time, this mirror that captures and sends conspiracy. I am here to tell you that it is all true and not at all what you think. You will read with some reluctance and capitulate in the end. The following pages will force you to succumb. I am going to tell you everything.”

These are a few excerpts from James Ellroy’s new novel, Blood’s A Rover, which was released on September 22nd, 2009. The author who also wrote, The Black Dahlia, L.A. Confidential as well as The Big Nowhere has earned nationwide success and acclaim for his work, which are often written in telegraphic prose style, a style of writing where words are omitted and one uses short staccato sentences. Premier Guide Miami’s Marie-Junie Pierre had a chance to conduct a one on one interview with Mr. Ellroy, otherwise known as the “Demon Dog of American Crime Fiction”, at Books & Books, located at 265 Aragon Avenue, Coral Gables, Florida 33134, where he was doing a reading and signing of his new novel.
PGM: Your novels have been hugely concentrated on crime, politics, and history and often contains a combination of all three. How did this influence come about?

JE: I’ve always sensed when I was a kid that there was a guy outside of the courts, or the cars with a gun and a briefcase so what I wanted to do was show this guy, the unsung legbreaker who implements public policy at its lowest level. I always had a sense of history outside the frame of my consciousness as it was going on 40 years ago. It took me 40 years to think of it but now that I am older, I have a sense of what it all means.

PGM: Tell me a little bit more about your new novel, Blood’s A Rover. How does it compare to your previous work?

JE: Well, there are definitely more women in this novel as well as more diversity of character and motive. The style is more explicated and the novel is more reader friendly.

PGM: I definitely look forward to reading it. Is there any particular author whom you feel has influenced your work in any shape or form including this novel?

JE: Well, I would definitely say Don DeLillo and his novel, Libra.

PGM:  “Libra”was certainly a very interesting perception of the Kennedy Assassination. Are there any projects that you are working on for release in the near future?

JE:  Yes. My memoir, “The Hilliker Curse” is coming out next fall.

PGM: I look forward to reading it. Can you give your readers a little bit more information as to what this memoir will be about?

JE: It’s about women and me.

PGM: Thank you so much for meeting with Premier Guide, Mr. Ellroy. We wish you the best of luck.

To purchase a copy of James Ellroy’s novel, please visit any Books & Books location or online at www.booksandbooks.com.