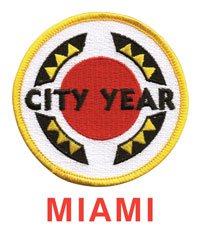 City Year Miami deploys 82 exceptional young leaders, known as corps members, to dedicate one full year of service in local schools and the community.  Corps members work towards lowering the high school dropout rate by serving in eight of Miami-Dade County’s lowest performing schools.  Since its inception to our community in 2008, City Year Miami corps members have served over 160,000 hours each year to Miami-Dade County.

As City Year Miami completes its third year of service in Miami-Dade County Public Schools, it will be joined by  corporate and community leaders during its annual Red Jacket Ball on Saturday, March 26th at the Ritz-Carlton in South Beach.  Corporate and community leaders such as, Comcast, The TriMix Foundation, Royal Caribbean Cruises Ltd., Univision, The Miami Dolphins, The Miami Herald, Publix, Deloitte and many others will support City Year Miami as it celebrates its impact and local efforts.

“As the presenting sponsor of this year’s Red Jacket Ball, Comcast believes strongly in the work City Year does in our most underperforming schools, putting students back on track towards high school graduation,” said Klayton Fennell, Regional Vice President, Comcast – FL East Coast Region.“Comcast has proudly partnered with City Year for more than ten years and we are thrilled to support the young leaders who have answered their call to service.”

Miami-Dade County Public Schools, Superintendent Alberto Carvalho, Univision, President, César Conde, The Miami Dolphins, CEO, Mike Dee and Senator Anitere Flores will be amongst the honorees and speakers for the evening in recognition of their commitment and dedication to City Year and the community as a whole.  It is through the efforts and partnership with these corporations, among others, that City Year has been able to demonstrate a high level of success in the public schools it serves.  The critical support of government, individuals, foundations and corporate partners have allowed City Year Miami to serve over thousands of students throughout Miami-Dade County Public Schools over its first three years of operations. Proceeds raised from this event will allow City Year to grow its program reach for the 2011-2012 school year.

“We are truly excited to host City Year Miami’s closest champions and supporters on a night when we celebrate the work of our 82 corps members who are everyday heroes to the students we serve in Miami–Dade County schools,” said Saif Y. Ishoof, Esq, Executive Director, City Year Miami. “We are thrilled to channel the support from tonight’s event towards our organization’s future growth.”