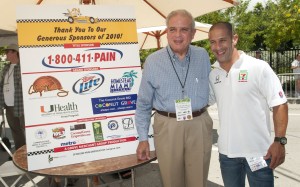 The 1.800.411 Pain Great Grove Bed Race was a huge success this past Sunday with over 35,000 people in attendance.  Grand Avenue and Commodore Plaza replaced cars with beds and welcomed visitors, residents and fans of bed racing to the streets of Coconut Grove. Sunday’s events started with a packed Family Pajama Party on Virginia Street at 11 a.m., featuring music, storytelling and an interactive obstacle course from Inferno’s Challenge. The attention turned down the block at 1 p.m. as a 27 member Flanagan High School marching band led the Pit Row Parade of decorated beds.  Finally, the main event, a 2 p.m. green flag waived as Grand Marshal Tony Kanaan, Indy 500 professional racer, called out “ladies and gentleman, tie your shoelaces and prepare those beds” and with his “ready, set,  go” the 2010 races launched down the Homestead-Miami Speedway sponsored 1/8th-mile track on Grand Avenue, Coconut Grove. 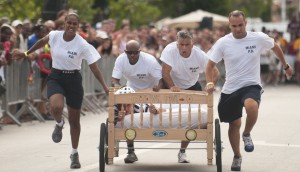 “A total of $20,000 was raised this year for local charities and our top beneficiaries the University of Miami Sleep Program and Alonzo Mourning Charities,” says Event Producer for the Grove Merchant Group, Daisy Lewis.  “Not only did we meet our fundraising goal but we also managed to more than double our crowd attendance from 2009.  This is a huge milestone for an event that’s only in its second year” adds Lewis.

Midway through all the bed racing excitement, a live parody at the finish line featured Barracuda Bar and Grove Ink in a bed-on collision that needed the attention of 411-PAIN “Paralegirls”. Stealing the show the 411 “Pain-paralegirls” interacted with a wild crowd while taking statements at the crash site and then loading male rider, 300 pound “Triton” from team Barracuda, into the 411 Pain decorated ambulance and taking a victory lap. 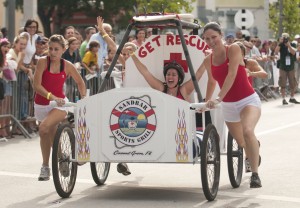 Thirty-two teams participated in this year’s bed race and while teams came all the way from Palm Beach and the Florida Keys, there must be something in the Grove Village water as champions in each division were homegrown. Sandbar and Grill’s female life guards brought bay watch beauty and speed to the track winning the women’s division, while the Grove 5-0 patrolled the finish line in style as corporate division winners. Mixing it up this year, the women joined University of Miami champs to take first in the co-ed division, showing Title 9 does work…women are equal! Finally the fastest of the fast, The Grove Spot team stayed fueled up with their “Breakfast in Bed” and took the ultimate trophy winning the Men’s division.

“The Grove is speedily and hilariously becoming the place to unwind on Labor Day,” says Felice Dubin, Co-Chair of the Grove Merchant Group.  “Pull up a bed and stay awhile…the Great Grove Bed Race sure is, and I guarantee next year’s race is going to be just as fun and entertaining,” adds Dubin. 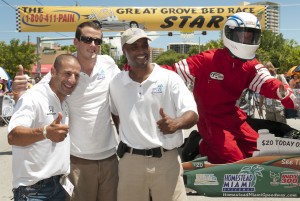 The 1-800-411-PAIN Great Grove Bed Race is produced by the Grove Merchant Group and proceeds benefits the University of Miami Sleep Program and Alonzo Mourning Foundation Charities. The Grove Merchant Group welcomes visitors and patrons to enjoy the tree-lined streets of Coconut Grove while branding the neighborhood as an attractive and viable village.  For additional information, visit www.thegreatgrovebedrace.com. 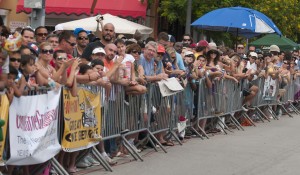