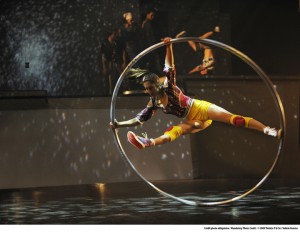 CIRQUE ÉLOIZE iD is the seventh original production from CIRQUE ÉLOIZE. CIRQUE ÉLOIZE and Cirque du Soleil have engaged in a long-term relationship based on common creative visions and international entertainment appeal.

Through large-scale projections evocative of the streets of Calle Ocho, the Port of Miami and the graffiti walls of the Wynwood design district, audiences at CIRQUE ÉLOIZE iD will be immediately immersed in a metropolis very much like Miami— a city perpetually transforming itself in the process of finding a new identity. The stage of the Ziff Ballet Opera House will come alive with the boundless energy of acrobats, break dancers, contortionists and a fearless stunt biker who perform against a kaleidoscope of eye-popping video drawn from science-fiction films, comic books and graffiti.

An exciting, moving, and unforgettable modern circus blending the daring soundtrack of rock, hip-hop, and electronica with the romantic heart of West Side Story, iD showcases the unique talents of a troupe of over 16 international artists—masters of hand-to-hand acrobatics, contortion, in-line skating, hip-hop, modern dance, break dance, and Cyr wheel all leading up to a stunning finale on the one-of-a-kind video trampowall.

“Cirque Éloize iD explores the concept of identity and how people from different backgrounds get along in a clan,” explains Painchaud. “Each artist represents a unique character that highlights the human spirit and the diversity of the human condition. “

As each distinct personality begins to emerge, the setting of iD is transformed into a place where—like Miami itself—diversity is nurtured, friendships are forged, love is created and identity is embraced.

Tickets to CIRQUE ÉLOIZE iD go on sale to members on April 12 and to the general public on May 19. Tickets start at $25 and may be purchased through the Adrienne Arsht Center box office by calling (305) 949-6722, or online at www.arshtcenter.org.*

Hailed by the Montreal Gazette as “a thrilling piece of work, full of attitude, energy and invention,” iD was created by Jeannot Painchaud, founder and artistic director of Montreal’s acclaimed CIRQUE ÉLOIZE, and has sold out in Montreal and Toronto. The high-energy all-musical spectacle (there’s no spoken word), features an original electronic score composed by Jean-Phi Goncalves (from the indie band Beast) and Alex McMahon, which features a Spanish-language hip-hop number among other electropop, dance, and vocal tracks. The creative team also features hip-hop choreographer Mourad Merzouki and costumes by Linda Brunelle.

iD is the seventh original production from CIRQUE ÉLOIZE. Since it began in 1993, Cirque Éloize has become a world leader in contemporary circus arts, with almost 4,000 performances in more than 400 cities around the globe to its credit. The award-winning company has enjoyed rave reviews and sold-out engagements at the world’s most prestigious festivals and theatres including Edinburgh International Festival, the Hollywood Bowl, Théâtre du Rond-Point des Champs-Élysées, Sadler’s Wells and the Barbican Theatre.