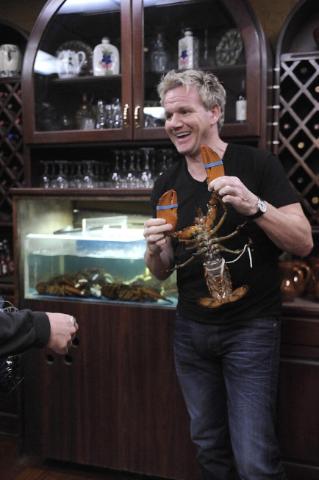 Despite his brash and confrontational temperament, Chef Gordon Ramsay does know a thing or two about food. He managed to maintain a three-star Michelin award for his restaurant Gordon Ramsay at Royal Hospital in Chelsea for 10 years. A rare ranking that is awarded to restaurants offering exceptional cuisine.

To prevent your restaurant from appearing on an episode of FOX’s Kitchen Nightmares, Gordon Ramsey offers advice to anyone who is contemplating on entering one of the toughest and most demanding careers anywhere in the world. He suggests keeping your restaurant local and cook according to what is on your doorsteps; do not venture outside your circle – stay within your neighborhood, and get the local community on your side first – that is your bread and butter. “Restaurants cannot progress, can’t start thinking Michelin stars and food critics,” he said. “It is absolutely crucial to cook for the vicinity and cook with what you’ve got locally.”

During filming, the tough chef met his match, and made history in a taping in Providence. It was the first time ever he was kicked out of a restaurant within minutes of entering it. “I didn’t even get the chance to finish my dinner, let alone help. A foxy tenacious manager kicked me out,” stated Ramsay.

According to the Chef, the restaurant was taking on room service from the hotel next door, and so he ordered room service for lunch which was a “hideous mess.” When he arrived at the restuarant for filming, which was literally next door, and explained to the manager about the horrific lunch he had received, and that he could not wait for dinner. They kicked off and the manager kicked him out of the restaurant.

In the interview, he shared information on changes in his multi-million dollar international empire from the departure of Chris Hutchenson (his father-in-law), CEO of Gordon Ramsay in Chelsea to rumors of bankruptcy filings in 2010, a French version of Kitchen Nightmare and he also admits that he is a control freak and works better under pressure.

Chef Ramsay visits Spanish Pavillion in Harrison, NJ, a family-run business established in 1976 whose owners, brothers Michael and Jerry, have allowed their differences to compromise the quality of the restaurant. With a head chef consistently absent from the kitchen and an unhappy staff, Chef Ramsay is determined to transform the outdated ambiance and menu in order to keep the family business afloat. Eager to witness dinner service, Ramsay is shocked to see both owners spend more time engaging in heated arguments than paying attention to the raw meals being served to the diners. Later, Ramsay gives the dining room and the menu a modern makeover with a Spanish flair and encourages the brothers to put their differences aside in order to preserve the family legacy. Find out if the restaurant’s makeover will encourage the brothers to work together, or if their old habits and tempers will be too much for the family business to handle in the “Spanish Pavillion” season premiere episode of KITCHEN NIGHTMARES airing Friday, Jan. 21 (8:00-9:00 PM ET/PT) on FOX.

On lessons learned:
Gordon Ramsay: Do not mix business with pleasure. As I am experiencing my own difficulties and jumping over the next hurdle, in terms of where I am – I am passing that knowledge straight back to these restaurant owners. It is closer than you think, and it has nothing to do with TV. It is definitely real, and as I am experiencing it, I am giving them first hand knowledge. I cannot deny that i have made mistakes, but the most important thing about making mistakes – my goodness – have I learned from them, and I tell it straight. In one of the upcoming episodes on Kitchen Nightmares, a personal in fight was ravelling in front of my own eyes, and having come out of the situation, I’ve got myself out of – I just went in there and told them as it was. My producer said he did not know that I was going to be so frank, and I told him I have nothing to hide. If I can help them to benefit from this sort of situation I have just come out of – all the better.

On changes in management:
Gordon Ramsay: I have replaced my father-in-law who was CEO of my company. He has been very instrumental for 10 years in establishing a worldwide reputation. I want to take it to the next level, now. We parted company. Sometimes change is a breath of fresh air. He has been and it gets very delicate as you can imagine. I put my hands in the air – I am a human being – I have a big heart -huge passion, and it is not easy dealing with family. Everytime I see that level of conflict in a restuarant while I am filming Kitchen Nightmare, I can actually, honestly relate to them. Working with your mother-in-law or your father-in-law is even more pressure than you think.

What Chef Gordon Ramsay learned about himself:
Gordon Ramsay: I get carried away, I get passionate. The minute anyone gets into business to think they are going to become a millionaire or they will have a TV program or write their own books, and to be on a level to be adulated with TV contacts etc., I tell them – You must – you must keep it real. i do like to think that 10 years down, i have not changed in terms of passion. Forget the money side and really understand and look at yourself in the mirror. The most important part is for them to be honest with themselves because it is hard. You have to work harder than your staff, you have to put in more hours, and you can’t look at the money. You have to set that example, and I have done that, I do the example and i do raise the bar, and so it starts from the top. It is a marathon, not a 100m sprint. I can say in the restaurateur eyes, “This is a vanity, a vain project for you – this is something that you really didn’t want to work…” The bloody training that goes on behind the scenes of basketball etc., is phenomenal and cooking is exactly the same. You must – you must – must master your craft.

Expanding Kitchen Nightmare:
Gordon Ramsay: I am looking at a potential Kitchen Nightmare in France. I lived in France for 3 years, and I loved it. it is like a second home to me. We just had an offer to go and look at a restaurant in Paris, and it was a restaurant that lost its 3 Michelin stars, and so it will be another level in terms of high end. I am so excited about the possibility of going in there and back to the stomping ground. I have a restaurant in Paris which is doing good for France, because they gave me so much. It wasn’t about making money or syndicating the show, it has nothing to do with whatsoever. I may not be doing it in Britain but I am certainly excited about the posibility that I am going off to France, and doing a series of 6 to 7 restaurants across France. That is a good one for me. I am fluent in french, and I love France.

He expressed his fondness for New Orleans food:
Gordon Ramsay: New Orleans food is extraordianry – absolutely extraordinary. I am so excited with the possibility of getting involved with the food in New Orleans and I am learning as well, that is the most important part. i have never stopped doing that.

Chef Ramsay on the press and his financial issues:
Gordon Ramsay: There is no business anywhere in the world over the last year or 18 months that have not experienced financial difficulties. Unfortunately, the stuff they report in the press is not accurate. I have clearly lost money over the last 18 months like any business. For me, the last 15 months have been very testing – it wasn’t about making money. The last 15 months in the restaurant industry was like navigating – navigating your way around this recession, and making sure that you stay strong. I have put money back into the company I am having issues with, but here is what I learned. I never went to business school, I sort of learn from a daily basis, today we celebrate10 years of a Michelin 3 stars, the longest ever British chef to hold three stars in England. And, out of respect for our customers who have supported us for that length of time, we will be lowering our prices to what they were 10 years ago.

You give and take, but I don’t sit there and worry and squander and follow every God damn word in the financial sector, because they are incorrect. The business is standing strong – yes we have lost money. We may have gone down but we are certainly not out – that’s for sure. It has been tough for everybody. Here I am talking about not making money in a restaurant, but people houses have gone into foreclosure. So, it was not a situation about being greedy, it is about being real, and that is exactly how I’ve played it over the last 15 months.