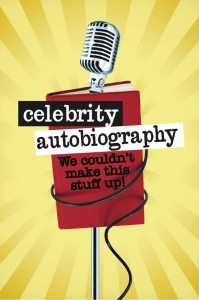 Hailed as “the funniest show in town, hands down,” (New York Post), CELEBRITY AUTOBIOGRAPHY has taken New York by storm and now makes its Miami debut in a series of uproarious performances featuring superstar memoirs acted out live on stage by fellow superstars!  Created and developed by Emmy® Award-nominated writer/performer Eugene Pack and Dayle Reyfel, CELEBRITY AUTOBIOGRAPHY features a first rate comedic ensemble of stars from stage and screen performing from the actual memoirs of a wide range of celebrities.  From Vanna White’s panel flip-outs to the Jonas Brothers’ sibling synergy and Sylvester Stallone’s secret stash in the fridge, no topic is off limits and every celebrity autobiography gets the full comic treatment.  The roster of superstar guests who have appeared in CELEBRITY AUTOBIOGRAPHY reads like a who’s who of the Hollywood Walk of Fame, including Matthew Broderick, Martin Short, Mario Cantone, Rosie Perez, Alan Cumming, Florence Henderson, John Leguizamo, and Brooke Shields.  Stay tuned for surprise celebrity guests to be announced for the Miami engagement!

Tickets are on sale now and may be purchased through the Adrienne Arsht Center box office by calling (305) 949-6722, or online at www.arshtcenter.org.