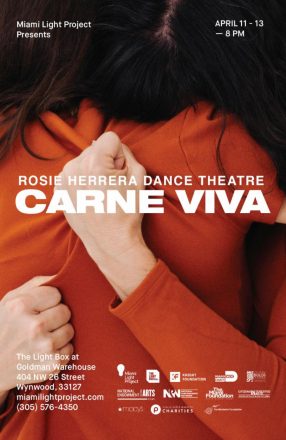 After a four year hiatus, Rosie Herrera Dance Theatre is finally back in MiamiI with Carne Viva – an exploration into the violence of transcendence! Loosely translated to mean “open wound” Carne Viva builds upon the themes of religion and romance for a work that is much sparser and physical than Herrera’s previous work. Brutal and elegant, Carne Viva is a visceral journey into the dichotomy of power within relationships.

Stick around for curated conversation with brilliant local instigators and creatives, and for an inevitable dance party!

Following the Thursday performance, Barry University dance scholar and critic Dr. Celeste Landeros will join Rosie and collaborators in a conversation that takes Carne Viva as a point of departure for a conversation on, love, transcendence, and Catholic mysticism.

Friday Post-Performance Discussion
Join Rosie Herrera Dance Theatre with director and dramaturg Michael Yawney regarding the interplay between religion, ritual and sexuality.
Saturday Post-Performance Discussion
Following the final performance of Carne Viva, join Rosie in conversation With Jenni Person as we discuss the unique history and significance of the Quartet for the End of Time – an iconic piece of chamber music by the French Composer Olivier Messiaen who wrote the piece while a prisoner of war in German captivity.