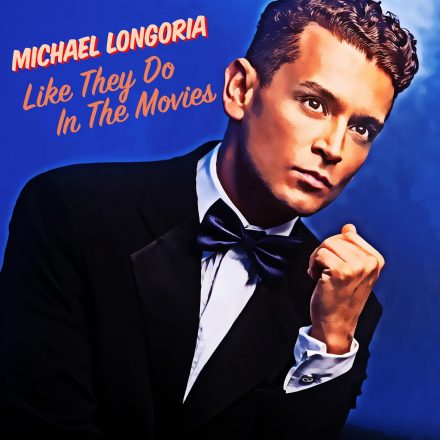 “When I would see movies in the 90s, I hoped that I would find a lover that would kiss me like they do in the movies.  Movies that showed the world how to fight for love were all the rage at the box office. Romantic love stories depicted in hits like The Bodyguard, Pretty Woman and Titanic made me dream of a love so deep that there would be a song written about it.  In my video for “Kiss me (Like They Do In The Movies)” our heros are on a first date going to see a romantic flick.  As the movie begins to roll, my character imagines himself as the leading man as he watches his love story unfold on the big screen. Sometimes, when words aren’t enough, you can say everything you need to with a kiss.”

Following the release of his critically acclaimed Christmas album, Merry Christmas Darling, Michael Longoria takes us to the cinema with a collection of his favorite songs from the silver screen. Like They Do In The Movies, is a romantic album that will take you back to a time when lovers lingered through the movie credits to steal a kiss in the glow of the big screen. Longoria’s cinematic love-note includes classics like “Evergreen” from A Star Is Born, “I Will Always Love You” from The Bodyguard, “Take My Breath Away” from Top Gun and “Unchained Melody” from Ghost. The album also features the debut of an original song written by Michael Longoria and arranged by James Dobinson called “Kiss Me (Like They Do In The Movies). Like They Do In The Movies features arrangements by Rona Siddiqui and James Dobinson, and is produced by Grammy nominee and 12-time Emmy Award winner Michael Croiter.

“When a powerful moment in a movie is punctuated with a great song… it elevates it to an iconic level. Everyone remembers Whitney Houston stopping the plane to kiss Kevin Costner one last time in The Bodyguard as “I Will Always Love You” became the anthem to what it feels like to truly love someone.  As tears rolled down each of our brokenhearted faces, we left the theater feeling like we personally had also loved and lost. I wanted to record an album of songs that would make people feel that level of sustained believability. Like the songs were written about them. I chose these songs over a year ago, and within that year, most of these songs hit me personally when I was going through similar scenarios to what the song writers were writing about. These songs also have a lot of my own heartaches and heart triumphs as I was experiencing them in real life.” — Michael Longoria

MICHAEL LONGORIA is best known for his star turn on Broadway as Frankie Valli in the Tony Award Winning Musical Jersey Boys.  In 2016, Longoria’s solo debut Broadway album, Broadway Brick By Brick, reached #2 on the iTunes Vocal Album Chart. Longoria’s second solo studio album, Merry Christmas Darling, was released in November of 2018 to critical acclaim. Currently starring in The Midtown Men concert tour and Meet The Midtown Men (a live concert/documentary for PBS), Longoria is crooning across the world in a rock concert celebrating the 60s. Their self-titled debut album, THE MIDTOWN MEN: Sixties Hits was met with critical acclaim and was followed by their first radio single “All Alone On Christmas” with producer Steven Van Zandt and backed by members of The E Street Band. Michael trained at the Los Angeles County High School for the Arts followed by New York University’s Tisch School of the Arts (BFA in drama). Longoria began his career with theatrical credits including Peter Pan & Wendy at the Prince Music Theater (Barrymore Award nomination for Best Actor in a musical), West Side Story at the Walnut Street Theatre,  A Chorus Line at Helen Hayes Performing Arts Center and Avenue X at the Abe Burrows Theater. Internationally; Longoria appeared in West Side Story at Teatro alla Scala in Milan and A Chorus Line in Munich. Michael made his Broadway debut in the smash hit musical Hairspray (2003 Tony award for Best Musical), later creating the role of Joey in the original Broadway cast of Jersey Boys (2006 Tony Award for Best Musical) before taking over the role of Frankie Valli. In 2017, Longoria created the role of Freddy in the original Off-Broadway cast of The View UpStairs and can be heard on the original cast album. He has appeared on television as the lead vocalist for Cirque du Soleil on the Season 9 Finale of America’s Got Talent, Broadway Under The Stars: A Tribute To Harold Prince, the Opening Ceremonies at The U.S. Open and as animated characters on Dora the Explorer. Longoria also appeared in the documentary film One Night Stand. As a headlining solo concert artist, Michael has appeared at Caesar’s Palace in Atlantic City, co-starring with SNL’s Joe Piscopo in That’s Life!  As a singer-songwriter, Longoria has performed his original songs at Joe’s Pub, The Cutting Room, CB’s Gallery and Caroline’s on Broadway. Longoria was nominated for Best Male Vocalist and Best Cabaret by The Glam Awards in 2016.

Broadway Records (Van Dean, President) is the Grammy® winning record label dedicated to preserving musical theatre and theatre vocalists. Recent releases include the Grammy® and Tony Award-winning The Color Purple (2015 revival), the Grammy® nominated Matilda The Musical, Fiddler on the Roof, Once On This Island and My Fair Lady, in addition to Anastasia, Bandstand, Groundhog Day, The Lightning Thief and NBC’s television events, “The Wiz Live!” and “Peter Pan Live!”. The label’s critically-acclaimed “Live at Feinstein’s/54 Below” series features top Broadway stars including Patti LuPone, Aaron Tveit, Annaleigh Ashford, Norbert Leo Butz, Sierra Boggess, Laura Benanti, Emily Skinner & Alice Ripley, Adam Pascal & Anthony Rapp, Micky Dolenz and many others. Broadway Records launched the Broadway for Orlando initiative (in partnership with creators Seth Rudetsky and James Wesley) culminating in the all-star benefit single, “What the World Needs Now is Love,” which leaped to #1 on iTunes with no radio airplay. Broadway Records philanthropic endeavors also include the From Broadway With Love benefit concerts for Sandy Hook, Orlando (Emmy Award for Sound) and Parkland. To learn more, visit BroadwayRecords.com.

GET SOCIAL WITH BROADWAY RECORDS: