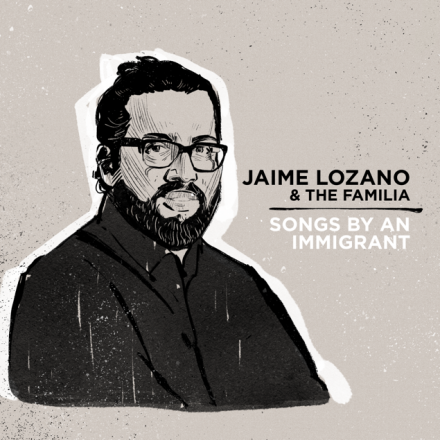 Broadway Records announced today the release of “Jaime Lozano & The Familia: Songs by an Immigrant”. Heralded the “next big thing” on Broadway by Lin-Manuel Miranda, Lozano’s new album will feature an eclectic collaboration of musical theatre, jazz, Mexican folklore, Tex-Mex, and Latin musicians and performers, with songs and stories about the immigrant experience, finding a new home, learning a new language, dealing with discrimination, trying to fit in, pursuing the American dream, being in love, and missing their native land. The album will also feature original liner notes from Lin-Manuel Miranda and will be released on Friday, October 2nd to celebrate Hispanic Heritage Month. A song from the album will also be featured at ¡Viva Broadway! Hear Our Voices, a digital celebration of Latinx talent, slated for the October 1st.

“If dreams had a soundtrack, one of my best dreams would sound exactly like this album,” says Lozano. “The Familia is this group of people from around the world, getting together now to tell our own stories. We are all immigrants in this world, and we need to stand together. I feel so honored and proud to have these amazing musicians and performers join The Familia.”

The album is produced by Lozano and his long-time collaborators Demián Cantú and Jesús Altamira, with associate producer Victoria Kühne. Arrangements and orchestrations are by Lozano and Altamira with vocal arrangements by Roke MD. The album is edited, mixed and mastered by Demián Cantú, and illustration cover art is by Martha Orendain. Lozano’s writing partners for the upcoming album include David Davila, Jorge “Georgie” Castilla, Marina Pires, Mark-Eugene Garcia, Migguel Anggelo, Neena Beber and Noemi de la Puente.

A portion of proceeds generated from sales of the album will benefit R.Evolución Latina. R.Evolución Latina, is led by founder/director Luis Salgado and co-directors Denisse Ambert, Heather Hogan and Gabriela García. It is an organization that activates individual and collective human growth through artistic experiences for transformation and social change. A Revolution of Evolution, Making a difference through the Arts. To learn more, visit www.revolucionlatina.org.

“Jaime Lozano is a thrilling new talent on the musical theater scene and if ‘Songs by an Immigrant’ is any indication, his will be a name we’ll be hearing from…in all languages…for many years to come,” says Splash Magazines. An accomplished musician, vocal coach, composer, arranger, orchestrator, musical producer, and musical theater director from Monterrey, Mexico who has been considered by Hamilton’s Lin-Manuel Miranda as the “next big thing” on Broadway.  This year Jaime is one of the five artists selected for the 2020 Joe’s Pub Working Group. Selected stage works include Tlatelolco, Myths, The Yellow Brick Road (Off-Broadway and National Tour), The New York Times said, “With its accessible melodies and robust harmonies, the score by Jaime Lozano and Tommy Newman earns comparisons to Stephen Flaherty’s music for Once on This Island,” Carmen La Cubana (European Tour), Children of Salt (NYMF 2016 “Best of Fest” Production), A Never-Ending Line (Comédie Nation in Paris, France and Off-Broadway), Savage (UAB at Birmingham), Present Perfect (Live & In Color). www.jaimelozano.net