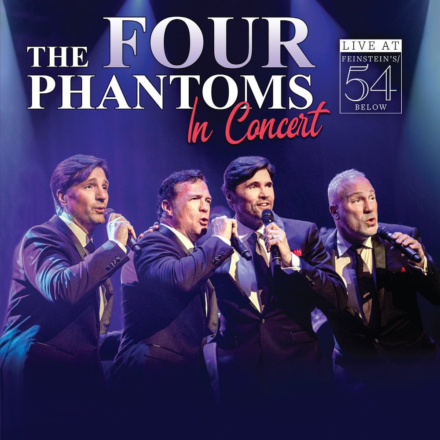 Broadway Records (https://www.broadwayrecords.com) announced today the release of “The Four Phantoms In Concert”.  The digital album is available Friday, January 14th wherever digital music is sold and on BroadwayRecords.com.  Preorders are now available for the physical CD to be released late this winter.

THE FOUR PHANTOMS brings together four former Phantoms from the Tony Award-winning The Phan­tom of the Opera for an unforgettable night of entertain­ment. The Four Phantoms In Concert features an extraordinary quar­tet of performers, including Brent Barrett, John Cudia, Franc D’Ambrosio, and Ciarán Sheehan, as well as special guest Kaley Ann Voorhees. The band includes Ryan Shirar on piano, March Schmied on Bass, and Jeremy Yaddaw on drums. Recorded live at Feinstein’s/ 54 Below. The album is executive produced by Franc D’ambrosio, David Caddick, and Donald K. Wilson, Esq. The album is produced by Lee Tonfanelli, co-produced by Michael Giacalone, and associate produced by Angela Giacalone, with orchestrations and music direction by Ryan Shirar, and engineering by Michael Cumming. Mastering was done at Rare Form Mastering by Greg Reierson, mixed by Rittenhouse Soundworks with an album package design by Robbie Rozelle.

4. THIS IS THE MOMENT (Frank Wildhorn / Leslie Bricusse)

6. ALL I CARE ABOUT (John Kander / Fred Ebb) – Brent Barrett

[The First Man You Remember; You’re Just In Love; It Only Takes A Moment; Tonight]

18. ALL I ASK OF YOU (Andrew Lloyd Webber / Richard Stigloe / Charles Hart) with Kaley Ann Voorhees

22. The Music Of The Night Intro

24. I’M NOTHING WITHOUT YOU (Cy Coleman / David Zippel)

Brent Barrett has entertained millions of fans around the world from the stages of Broadway, the West End, concert halls, recording studios, and on television. He recently reprised his role as Billy Flynn in the Tony Award-winning hit, CHICAGO-The Musical, for which he received a LA Drama Critics Award. Prior to his Broadway return, he relocated to Las Vegas where he was asked to open the new production of Andrew Lloyd Webber’s Phantom-The Las Vegas Spectacular. Brent starred in the title role for two years to sold-out houses at the Venetian Hotel. Brent received an Olivier Award nomination for his starring role in the London premiere of the Tony Award-winning Broadway revival of Kiss Me, Kate. His acclaimed performance was recorded for broadcast on PBS and is available on DVD.  He also starred in the City Center Encores! production of The Pajama Game and as King Arthur in the Paper Mill Playhouse production of Camelot. Other Broadway roles include Frank Butler in the Broadway revival of Irving Berlin’s Annie Get Your Gun opposite Reba McEntire, Charles Castleton in the Alan Jay Lerner musical Dance a Little Closer, and Baron Felix Von Gaigern in Grand Hotel.

John Cudia holds the distinct honor of being the first and only actor to have performed both as the Phantom in The Phantom of the Opera and Jean Valjean in Les Misérables on Broadway. John’s most recent Broadway run counted him as only the 12th performer to play the Phantom in its historic, record-breaking 30 plus years. John played Jean Valjean at the Marriott Theater in Chicago where his performance earned him the Joseph Jefferson Award for “best actor in a musical.” John proudly made his Broadway debut in Les Misérables and enjoyed a long and successful relationship with both Les Misérables and The Phantom of the Opera. John’s third Broadway credit was as cover to Juan Peron in Evita with Ricky Martin as Che. John toured the United States and Canada as the Phantom and has also played the role of Raoul on Broadway and the North American tour. John has helped develop new works for the theatre with Roundabout Theatre, the Banff Theatre Centre, Paper Mill Playhouse, and composers Jonathon Dove, Frank Wildhorn, and Maury Yeston. John is equally at home on Opera, Theater, and Concert stages. A lyric tenor, he proudly made his Lyric Opera of Chicago debut as Curly in their production of Oklahoma! for Vancouver Opera, John most recently sang Count Danilo in The Merry Widow. Previously for Vancouver Opera, he sang Cassio in Otello and Juan Peron in Evita. For Indianapolis Opera, he created the role of Dr. Woodly in the World Premiere of Happy Birthday Wanda June by Richard Auldon Clark with Libretto by Indiana’s own Kurt Vonnegut. For Lyric Opera of the North, he sang the Duke in Rigoletto and Alfredo in La Traviata.

Franc D’Ambrosio is best known for his impressive portrayal of the lead role in Andrew Lloyd Webber’s Tony Award-winning musical, The Phantom of the Opera. Affectionately known as the “Iron Man of the Mask,” Franc held the title of “The World’s Longest-Running Phantom” for more than a decade after bringing over five million theatre-goers to their feet in a six and one-half year run. Franc’s resume also includes an Academy Award-nominated film when he played the opera-singing son of Al Pacino and Diane Keaton in the seven-time Academy Award-nominated film, Godfather III. He also sang the Academy Award-winning theme song of the movie, “Speak Softly Love,” for both the film and the soundtrack. His performances of the theme song have garnered over one million hits on YouTube. Having previously studied with Luciano Pavarotti and at the famed Vocal Academy of Lucca in Italy, Franc quickly cultivated a passion for his Italian roots and culture. Franc founded the Lorenzo Malfatti Accademia Vocale di Lucca, where he teaches his craft to young opera students each summer. Franc also lectures at music schools throughout the United States and Europe, including conservatories in Spoleto and Florence, Italy, and the famed Juilliard School in New York City. Franc has toured extensively throughout the world with his critically-acclaimed one-man shows.

Ciarán Sheehan, a native of Dublin, Ireland, has performed the role of the Phantom in The Phantom of the Opera to critical acclaim both on Broadway and in Toronto, Canada. Other Broadway roles include Raoul in The Phantom of the Opera and Babet and Marius in Les Miserables.  Broadway concerts include Sir Dinadan in Camelot with Jeremy Irons and Woody in Finian’s Rainbow opposite Melissa Errico. As a member of The Irish Rep, Ciarán has appeared in many of their productions including Hal Prince’s Grandchild of Kings, and Frank McCourt’s The Irish…And How They Got That Way. Recent work includes Adam in Fifty Words, Tone in The Final Days of Wolfe Tone, both in New York, Billy Bigelow in Carousel in Boston, soon to play Bartell d’Arcy in Joyce’s The Dead with Kate Burton in New York, and is currently producing and starring in an Off-Broadway production of O’Neill’s Anna Christie. Ciarán has had the great honor to sing the memorial mass for John and Carolyn Kennedy, and the funeral mass for Beau Biden, at the request of Vice President Joe Biden, both televised worldwide. Ciarán has performed in three PBS Specials: The Irish…And How They Got That Way, From Galway to Broadway, and Ciarán an Evening With Friends.

Special Guest Kaley Ann Voorhees is best known for her portrayal of Christine in Andrew Lloyd Webber’s longest-running musical, The Phantom of the Opera on Broadway. She is one of the youngest to play the role at the Majestic Theatre, starting her run at the age of 20. She was also in the original Japanese and Broadway cast of Prince of Broadway and made her opera debut in New York City Opera’s Candide. She was formerly a BFA Musical Theatre major at Point Park University, and the recipient of the Jean L. Pettit Memorial Scholarship Competition, which gave her the opportunity to sing as a soloist with the Cleveland Pops Orchestra at Severance Hall at the age of 18.

Broadway Records is the leading, Grammy® winning record label dedicated to releasing the most popular and current Broadway cast recordings, as well as preserving legacy musical theatre and theatre vocalists’ repertoire. Under the leadership of Broadway Records’ president and founder Van Dean, recent releases include: If The Fates Allow: The Hadestown Holiday Album,  Grammy® Nominated Burt Bacharach & Stephen Sater’s Some Lovers,  Grammy® Nominated Stephen Schwartz’s Snapshots, The Lehman Trilogy, Randy Rainbow’s A Little Brains, A Little Talent, Legacy: Two Song Cycles by Ahrens and Flaherty, the Grammy® and Tony Award-winning revival of The Color Purple, the Tony Award® winning and Grammy® nominated revival of Once On This Island, the Grammy® nominated Matilda The Musical, Fiddler on the Roof (2015 revival) and My Fair Lady (2018 revival), Anastasia, Bandstand, Groundhog Day, The Lightning Thief and NBC’s television events, “The Wiz Live!” and “Peter Pan Live!” as well as solo albums from Patti LuPone, Lea Salonga, Brian Stokes Mitchell, Jessica Vosk, Kyle Taylor Parker, and many more. The label’s critically-acclaimed “Live at Feinstein’s/54 Below” series features top Broadway stars including Aaron Tveit, Annaleigh Ashford, Norbert Leo Butz, Sierra Boggess, Laura Benanti, Robbie Rozelle, Adam Pascal & Anthony Rapp, Micky Dolenz, and many others. Broadway Records philanthropic endeavors also include the “Broadway For Orlando: What The World Needs Now is Love”, “We Are The World” by Broadway United and “Broadway Kids Against Bullying: I Have a Voice” music videos and From Broadway With Love benefit concerts for Sandy Hook, Orlando (Emmy Award for Sound) and Parkland. www.BroadwayRecords.com

GET SOCIAL WITH BROADWAY RECORDS: Facebook.com/BwayRecords