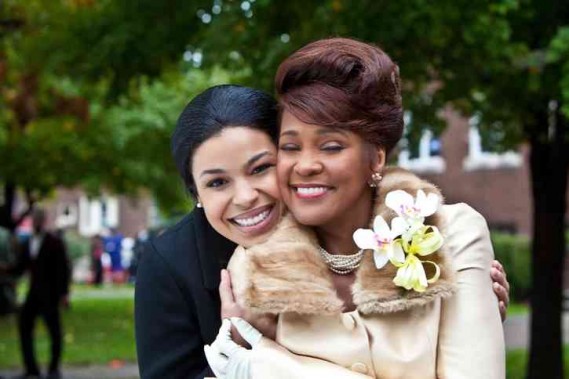 “I just wanna be a star.”_Jodin Sparks | Sparkle

For everyone who enters the entertainment industry, their hopes and dreams are surrounded mainly on becoming a star or to be famous. No different are the young actresses in Sparkle. Sparkle 2012 is the Sony Motown movie-musical, an updated version of the 1976 Supreme-inspired film.

Like the original film, three sisters, the sexy bombshell and group leader, Sister played by British actress, Carmen Ejogo; medical student, Doleres played by Tika Sumpter and the ambitious and innocent Sparkle Williams played by Jordin Sparks all have aspirations of making it big as a singing group. However, they were faced with pitfalls, obstacles like drug addiction that clouded their way to success. And an overbearing, strict and religious mother, Emma played by late Whitney Houston who is afraid to let her grown children go out into the world without a proper education, God, and the church as their sword and anchor. Emma who has had a failed R&B career, feared Hollywood would be a distraction and destruction for her girls.

“Was my life not enough of a cautionary tale for you?” referring to her life and how she fell off the wagon. This movie mirrors Whitney’s life in so many ways. Strangely, life imitates art and draws several parallels to Whitney’s own personal story. Her battle with drug addiction, the church as her birthplace to fame and stardom, and her tragic death were all her struggles as were depicted in Sparkle. In some ways, this movie was more about Whitney’s story where periods of her life was played out in each character (like Sister her eldest daughter who had difficulty balancing her life and career). Throughout this movie we saw some of her pain, disappointments and an attempt to make it right through Sparkle’s solo performance. It was not a definitive reflection, but one we can relate to.

Whitney’s role was strong, somehow I felt cheated. Her performance was not as poignant as The Body Guard and The Preacher’s Wife. Understandably so, due to the issues that plagued her in her later years. This seemed like Whitney’s baptism to a comeback, rebirth if you will, if she was still alive both as an actor and a distinct entertainer and singer.

Critics have been harsh with their reviews and comparisons with Dream Girls another supreme-like remake with American Idol star, Jennifer Hudson. The thing I like most about this film, it was not diva-esque or over the top like Dream Girls. Yes, Dream Girls had star power Jamie Foxx and great performances from Beyonce; however, sparkle was more subtle with an authentic feel and acting.

Remakes are never intended to be an exact representation of the original, like Spiderman which has been recreated so many times. Husband and wife directing and writing team, Mara Brock and Salim Akil the creators of The Game, Jumping the Broom and Girlfriends have made this film their own keeping major story lines from the original while replacing others to better appeal to today’s audience. Originally filmed in Harlem, New York; from the ghetto to superstar, the new sparkle was filmed in Detroit, Michigan to better tell the story of the period where Motown was born. The writers changed the fate of Sister, instead of killing her off in the end; she was imprisoned for murdering her abusive, drug addict and comedian boyfriend, Satin Struthers played by Mike Epps. Epps played the demonic role and bad influence that was introduced to distract Sister from the ways of the lord and her career. A role he played brilliantly as if he was consumed by this character. Also, Sparkle 2012 kept some of the original music from Curtis Mayfield collection and introduced new musical numbers written by R. Kelly.

A sad, heartbreaking and the most powerful moment of the movie came when Emma learned that her daughter, Doleres was leaving for medical school. We had an opportunity to see Whitney’s vulnerability and a little bit of her pain, when she cried. “These are happy tears, it makes me feel like I have done something right,” she said.

Whitney took us back to church with a rendition of His Eye is on the Sparrow. This was her lone singing contribution in the movie and she took us back to the beginnings, where it all started; in the church. The place that played a significant role in her upbringing, and it was almost like she was sending us a message–I am coming back to where it all started, this is my rebirth. It may not have been her optimum performance but it was wholehearted. She gave us what she could, given her circumstances. And her voice still gives goose bumps, a natural reaction when she performs-her voice touches you-only Whitney can.

Looking back at Whitney’s performance in the Preacher’s Wife and Body Guard, she gave a satisfactory effort here. She was not over the top or diva-esque in any way. Other vulnerable and painful moments that forced the audience to remember her tragic circumstances came in periods of the movie where she struggled with her daughters. You could almost feel her sadness and pain.

British actress, Carmen Ejogo played the sexy bombshell, glamorous and unsettled lead singer of the group, Sister and her Sisters. For the most part she pulled the movie home by delivering an entertaining role both with her sexuality and her talent. She had fire and heats up the movie throughout, she carried the movie with an equally strong performance from Mike Epps. At times it seemed as though she was telling Whitney’s story. A beautiful and talented young woman who had a promising future was side tracked by an abusive partner who influenced her with drugs which brought her to a tragic ending, he murdered and she behind bars–no more music, no more drama.

In life and fiction, we often look for happy endings. In the film, Sparkle had her moment of success when she was booked to perform her solo performance proving that her drive and hard work pays off in the end. With her sisters separation she was forced to take her dreams in her own hands and to make them reality. She performed in a hell raising-fire engine red dress similar to a costume piece worn by Diana Ross on her tours. Jordin Sparks played the sensitive and shy role of Sparkle. The audience had a chance to see some of Sparks’ weakness and strengths. Given that it was her movie debut, she gets a passing grade and as she gets more roles her talents will develop. At first she appeared a bit nervous on screen due in part to the innocent role she played. However she eventually grew into the role and delivered a believable performance that she could be considered for more serious roles. The singer who has been in love with Jason Derulo for more than a year now, did not appear confident or in love with her on screen love. She did not seem developed enough to play a romantic role on screen, as much as we would have loved to see her connect more. I guess we will see more as she continues to grow and develop her talent. Though this was regarded as guarded and safe, Sparks has done her share of acting on Broadway, and can now add Sparkle to her resume as a debut success .

Sparkle should not be written off or scrutinized under the magnifiers of Dream Girls, instead it should be remembered as Houston’s last role and Jordin Sparks christening to the big screen, or even the passing of the baton to new and younger talents.