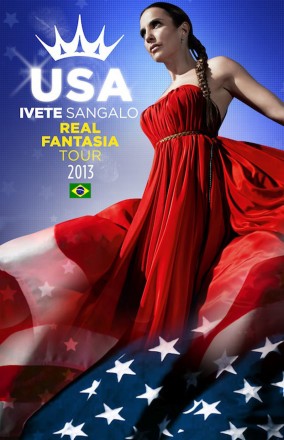 AmericanAirlines Arena in Miami on Aug. 18

Ivete Sangalo, one of Brazil’s leading female pop music icons with a remarkable career spanning over two decades, will bring her “Real Fantasia 2013” tour to the U.S. for a five-city run in August. The tour will begin Aug. 9 at the Fox Theater in Oakland, and continue on to the Nokia Theatre L.A. Live in Los Angeles on Aug. 10, the Lynn Auditorium in Lynn, MA on Aug. 16, the Prudential Center in Newark, NJ on Aug. 17, and lastly the AmericanAirlines Arena in Miami on Aug. 18.  Tickets for the shows in Oakland, Newark and Lynn are on sale now, and will go on sale in LA and Miami on Friday, June 28.

Ivete made a huge impression in the tri-state area in 2010, when her Madison Square Garden concert sold out weeks in advance, resulting in a hugely successful CD and DVD, “Multishow Live – Ivete Sangalo at Madison Square Garden.” The NEW YORK TIMES concert review headline summed up the excitement: “Arena Full of Fans Caught Brazilian Fever and Had to Sing Along.”

The powerhouse singer from Juazeiro, Bahia is currently touring in support of her tenth solo CD, “Real Fantasia,” released October 2012.  The CD showcases the versatile and contagious style of the artist between axe music from Bahia, pop and ballads. “Real Fantasia is the name of a track, the album, and the tour because of what it represents,” says Ivete. “It’s a translation of my life, what I’m living. My reality is a fantasy. It is playful and deeply rooted in music and art, like a daily Carnival.”

The Real Fantasia tour presents several innovations. The new repertoire mixes songs from the CD and Ivete’s greatest hits, many with new arrangements. The selections were made with the help of fans, who sent suggestions via Twitter. The show also features new choreography and costumes.  Fans can look forward to interactivity as cameras will capture images of Ivete’s band and audience for broadcast on the giant LED screen to meld the backdrop of the show and the content of the show and make each performance unique.

In 1999, after five years of success as lead singer of Banda Eva, the singer from Juazeiro, Bahia, branched out and has become one of the most important artists in Brazilian music. The singer has released ten CDs and four DVDs, which have sold more than 16 million copies in Brazil and abroad.  Ivete Sangalo Multishow – live at Maracana, has the distinction of being Universal Music’s best-selling concert DVD – worldwide in 2007.  Ivete is the undisputed “Queen of Carnaval” in Salvador.  Ivete is also a reigning star in the social media world, with over 200 registered fan clubs and over 8 million Twitter followers.