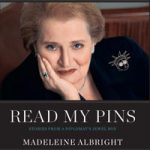 Madeleine Albright was the first female Secretary of State of the United States and, at that time, the highest ranking woman in U.S. history.  Like most women, she had occasionally worn pins before entering public service, but it was when she took office as America’s Ambassador to the United Nations, and then as Secretary of State, that she came to understand how powerful a symbol an item of jewelry could be. In READ MY PINS, Secretary Albright shares the compelling and often humorous stories behind her unique pin collection, and explains how pins became, for her, a signature diplomatic tool.

Part illustrated memoir, part social history, READ MY PINS, published in conjunction with the Museum of Arts and Design’s first major exhibition of jewelry from the collection of Madeleine K. Albright, captures the wit and expressive nature of the pins Albright wore as she met with world leaders and represented her country in formal and informal settings across the globe.  Among other purposes, Albright used pins to emphasize the importance of a negotiation, to signify high hopes, to protest delays in taking action, and to show pride in the traditions of her office.  It is little wonder that international counterparts were pleased to see her appear at meetings with a shimmering sun on her jacket or a cheerful ladybug; less so when she wore an ill-tempered crab or a menacing wasp.  As these pages reveal, Albright’s collection is both international and democratic – dime-store pins share pride of place with designer creations and family heirlooms. Included is the snake pin she wore after being denounced by Saddam Hussein’s poet-in-residence as “an unparalleled serpent”, the antique eagle purchased to celebrate Albright’s appointment as Secretary of State, the zebra pin she wore when meeting Nelson Mandela, and the Valentine Day’s heart forged by Albright’s five-year-old daughter.

READ MY PINS features more than 200 photographs along with lively stories about jewelry, global politics, and the career of one of the world’s most respected and fascinating diplomats. We will be in touch soon to discuss review and feature opportunities.

About Madeleine K. Albright
Madeleine K. Albright was the 64th Secretary of State of the United States. Serving from 1997 until 2001, she was the first woman to hold that position, which she assumed after four years as U.S. Permanent Representative to the United Nations.  During her tenure, Dr. Albright was known for her strong commitment to democracy, arms control, human rights and peace in the Middle East, Africa and other regions of conflict.  She played a lead role in forging America’s successful response to terror and ethnic cleansing in Kosovo, and was a forceful advocate of bringing war criminals to justice.

Since leaving office, Dr. Albright has authored three New York Times bestsellers. Her autobiography, Madam Secretary: A Memoir, was published in 2003. A second book, The Mighty and the Almighty: Reflections on America, God, and World Affairs, entered bookstores in 2006. Memo to the President: How We Can Restore America’s Reputation and Leadership was published in 2008.

Currently, Albright serves as a Chair of Albright Stonebridge Group, a global strategy firm, and Chair and Principal of Albright Capital Management LLC, an investment advisory company focused on emerging markets.  She is the first Michael and Virginia Mortara Endowed Distinguished Professor in the Practice of Diplomacy at the Georgetown University School of Foreign Service. She chairs both the National Democratic Institute for International Affairs, and the Pew Global Attitudes Project and is president of the Truman Scholarship Foundation. Dr. Albright co-chairs the UNDP’s Commission on Legal Empowerment of the Poor, serves on the Board of Directors of the Council on Foreign Relations, the Board of Trustees for the Aspen Institute and the Board of Directors of the Center for a New American Security.