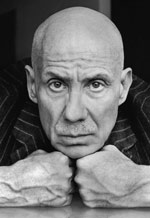 It’s impossible not to read Blood’s A Rover with a sense of awe . . . It’s a stunning and crazy book that could only have been written by the premier lunatic of American letters.”
–Publishers Weekly (starred)

Meet James Ellroy for Reading and signing of Blood’s A Rover (Knopf, $28.95)

Summer, 1968. Martin Luther King and Robert Kennedy are dead. The assassination conspiracies have begun to unravel. A dirty-tricks squad is getting ready to deploy at the Democratic Convention in Chicago. Black militants are warring in southside L.A. The Feds are concocting draconian countermeasures. And fate has placed three men at the vortex of History.
Dwight Holly is J. Edgar Hoover’s pet strong-arm goon, implementing Hoover’s racist designs and obsessed with a leftist shadow figure named Joan Rosen Klein. Wayne Tedrow—ex-cop and heroin runner—is building a mob gambling mecca in the Dominican Republic and quickly becoming radicalized. Don Crutchfield is a window-peeping kid private-eye within tantalizing reach of right-wing assassins, left-wing revolutionaries and the powermongers of an incendiary era. Their lives collide in pursuit of the Red Goddess Joan—and each of them will pay “a dear and savage price to live History.”
Political noir as only James Ellroy can write it—our recent past razed and fully reconstructed—Blood’s A Rover is a novel of astonishing depth and scope, a massive tale of corruption and retribution, of ideals at war and the extremity of love. It is the largest and greatest work of fiction from an American master.

About the Author
James Ellroy was born in Los Angeles in 1948. His L.A. Quartet novels—The Black Dahlia, The Big Nowhere, L.A. Confidential, and White Jazz—were 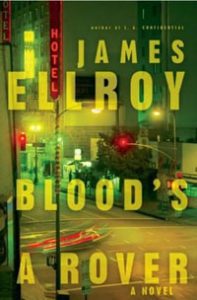