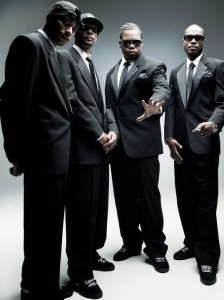 Grammy Award Winning seminal hip hop vocal group, Bone Thugs-n-Harmony, bring their hit club tour the E. 1999 Eternal Tour to Revolution Live in Ft. Lauderdale.  The new tour which will be backed by a live band will feature Bone Thugs playing all their hits.  The new tour will feature the line up of Krayzie Bone, Layzie Bone, Wish Bone and Flesh-n-Bone.  The band decided to focus musically on their hit CD E. 1999 Eternal which was a tribute to late rap superstar Eazy-E.  The hit tracks from that CD, “1st of Tha Month” peaked at #14 on the Billboard Hot 100 Singles Chart while the follow-up “Tha Crossroads” was #1 on both the Billboard Hot 100 Singles Chart and The Billboard Rap Track Chart.  Since their inception in 1993 Bone Thugs-In-Harmony have sold over 30 million records over the 11 studio albums and 5 Greatest Hits packages and compilations making them one of the most successful and prolific hip hop groups of all times. Known mostly for their unique flow and lyricism, Bone’s style and technique can be described as melodic, rapid-fire and aggressive. Their flow is often interwoven at a high-speed, melodic pace or slow, harmonic pace. Their subject matter includes other topics such as urban socio-political issues, and religion. They have been out spoken and major advocates of the legalization of marijuana in California and beyond.

ON SALE:        NOW AT THE REVOLUTION LIVE BOX OFFICE, www.livenation.com

AND ALL TICKETMASTER OUTLETS