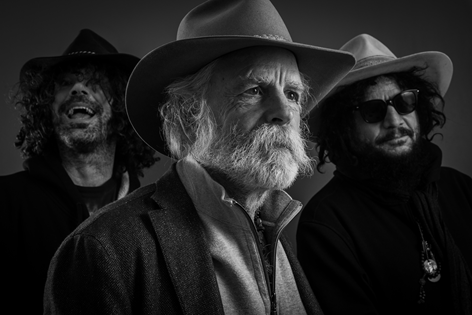 Bob Weir is one of the founding members of the legendary Grateful Dead, which received a GRAMMY Lifetime Achievement Award in 2007. The band has also appeared on Forbes’ list of top-grossing entertainers and in the early ‘90s were the highest-grossing concert attraction in the U.S. Since establishing the band in 1965, Weir has become one of rock’s finest and most distinctive rhythm guitarists. His new project is Bob Weir and Wolf Bros featuring Weir, Don Was and Jay Lane performing songs of the Grateful Dead and more. “Wolf Bros is something that really took its roots back in the spring of 2015 when Don Was helped us piece together Dead & Company,” Bob Weir said of the new project in a statement. “For a while now I’ve been itchin’ to explore our songs in a trio setting. An upright bass, my acoustic or electric guitar and a drummer. We did some rehearsals this past spring and it was big fun—and that’s the whole idea. We were kickin’ around Dead songs as well as tunes from my back pages. I’m pretty sure we’re gonna have a big adventure with this…”

Don Was as a bass player and bandleader is known for Was Not Was. But his list of producing and collaboration credits is miles long, from the Rolling Stones to John Mayer and Bob Dylan.  Was introduced Weir and Mickey Hart to John Mayer, which eventually led to the formation of Dead & Company.  Jay Lane is a founding member of Weir’s longtime band RatDog. The drummer also toured with Furthurand performed with Weir and Rob Wasserman as part of Scaring The Children.