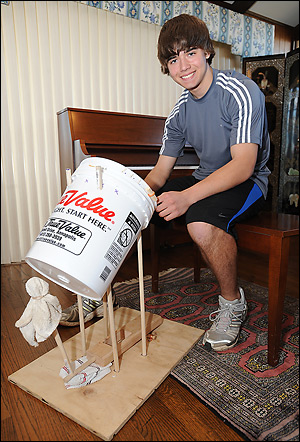 Blue Man Group is proud to announce the winner of its Invent an Instrument National Contest held in partnership with education leader Scholastic. The Blue Man Group Invent an Instrument Contest is an annual creative competition that challenges students in grades 5-9 to use their ingenuity and creativity to invent an original musical instrument out of repurposed or everyday objects. This year, over 400 submissions were received. The entries were reviewed by a celebrity judging panel including Chris “Ludacris” Bridges, Steve Van Zandt, Pat Metheny, Nile Rodgers, Joel Peresman and Mark Hoppus, who chose Chase Rudisill, a 15 year old 9th grader from South River High School in Edgewater, MD as the winner of the contest for his unique homemade instrument: “The Bass Guitar Drum.” The Contest runners-up were 8th grader Katelyn Owen of San Diego who invented a ‘Bike Pipe’ and 6th grader Benjamin Johnson of Aurora, Nebraska who invented a ‘Zipper Wall.’

As part of his prize package, Chase Rudisill and his family will travel to Blue Man Group at Universal Orlando Resort, where the Grand Prize winning instrument will be featured during the Blue Man Group Education Program live performance on Thursday, May 12 at 10:30AM. Contest runners-up Katelyn Owen and Benjamin Johnson will also be flown to Universal Orlando Resort for this event. Chase and Deborah Lesko, the teacher who sponsored him, will also each be awarded $5,000.

Chase’s victory was covered locally at the following links

The “bass guitar drum” has it all.  It’s ingeniously crafted from everyday materials (rubber bands, a plastic bucket, etc.); it’s musically versatile (you can play beats as well as a wide range of notes); and – most importantly – it sounds cool.  Using the bucket as both a drum and a resonator for the strings is brilliant.  Also, since the rubber bands can be tuned to or played at any pitch, the “bass guitar drum” player can express almost anything he can dream up.   We were impressed and amazed by how versatile and musical such basic objects could be once they had been put together in such an imaginative way.   The “bass guitar drum” was the clear winner in our book.

The Bike-Pipe is both an imaginative instrument and a fascinating piece of “junk” sculpture.  We loved the fact that it takes two people to play it and that it’s composed of so many different – seemingly unrelated- found objects.  Adding pitch control to the tube was a nice touch.  The bike-pipe may not be the most versatile musical instrument, but it’s a fascinating machine that generates a unique and unusual sound.  Clearly the result of a fertile and inventive imagination!

The zipper wall shows just how much sound can be gotten out of only a few everyday objects (zippers, coins, Velcro) if you also apply a healthy dose of imagination.  This instrument makes a variety of cool percussive sounds and amplifies them acoustically using basic resonant chambers.  It’s well-crafted, cool to look at, and probably fun to play!  Nice work!

As an organization, Blue Man Group strives to create work that is unique, original, and inventive, consistently identifying areas where new and unconventional approaches can be explored and developed.  These values are applied throughout the organization, including in the development and construction of instruments.