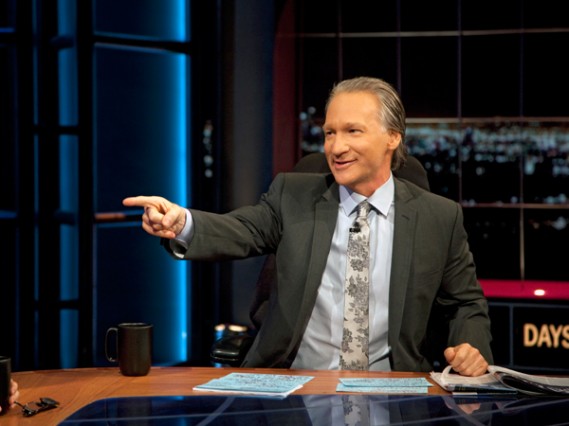 Iconoclast Mort Sahl was the king of political satire attacking presidents and political leaders with sharp rhetoric and topical humor that really mattered. John F. Kennedy, President Nixon and Dwight Eisenhower were subjects of his regular whippings and he did it without being apologetic.

Even though there is none like Mort, some have tried to emulate his style of fierce satire but few posses the comedic talent. “Bill Maher is just negative…and the cursing! Maher likes me a lot but he thinks I am naive,” Mort once said of Bill. Even so, he has been the greatest influence on bill’s comedic life whose work is similar to his.

Sex, Clint Eastwood, religion, church, the Republican Party notables like Mitt Romney, Paul Ryan, Sarah Palin, and even president Barack Obama were fodder for the comedian’s stand up. No stones were left unturned.

Coming off the heels of the Republican Convention in Tampa, Florida, the Republicans have provided Bill with enough ammunition to unload on the audience, most of which they fully absorbed. He summed up the Republican Party in the first 30 minutes of the show. A party of NO. No more Obama, No Sex, No contraceptives, No gay marriages and the list goes on.

On stage Bill reintroduced presidential candidate, Mitt Romney to the audience, an attempt failed by the RNC2012. “Ambian takes Mitt Romney to go to sleep…paint watches him while it‘s drying,” referring to Mitt Romney as being the most uninteresting man in the world. He went on by saying that Ann Romney tried to give a humanizing speech about her husband, instead she made him sound like an appliance.

He praises Clint Eastwood for his rambling Obama monologue and for making the audience laugh a full 12 minutes, a feat that comedians find very hard to do; he made it look easy. For Bill, Clint was the perfect representative for the Republicans-a typical old white guy talking to an imaginary Obama. He also said that Clint was upset that people were criticizing him because they were taking away his freedom of speech. Bill also went on to say that he did not want to take away Clint’s freedom of speech; just his keys. “They sent Condi to get Clint off stage…they did it by pretending she was his Haitian aide,” Maher stated.

Sarah Palin has resurfaced and has been going through her battles with her current employers at FOX regarding her contract. She did not escape Bill’s wrath. He criticized her on her family and politics with brief mention of her son. “The only demographic that like Sarah Palin are white men who only wants to f**k her,” he said.

The GOP gave him plenty to discuss, and he went wild on sex and contraceptives. He expressed his disdain for the Republican Party and wondered why people vote Republican when they are so against sex. He thought Todd Akins’s comment about a woman’s magical vaginal shut down was really terrible, but felt Rick Santorum was worse. Santorum had said in the past that he did not believe in contraceptives. “What era are they living in? What he doesn’t get is that women like to get laid.”

According to Maher, host of Real Time on HBO, 95 percent of Catholics are practicing birth control, and the church doesn’t believe in it. He said, “The only Catholics not using contraceptives were the priests. If they found out Catholic boys could get pregnant, they would be using, too.”

Bill Maher relates very well with the audience, and his material laced with current events and politics was right for the moment and the crowd.

During the RNC2012, the Republicans used their platform to lash the president and his policies. At the Hard Rock, Bill tried to take some pressure off his back with light humor about president Obama. He hopes the president gives his next speech in a pimp or gangster attire–a purple suit with 12 buttons up front and an afro. President Obama is half black, half white, Maher claims that for the past 4 years, the president has presented the white side and plans to show the black side if he is re-elected. He also wishes the president would quit trying to be liked by everyone.

This politically charged stand up was more like a campaign Obama 2012 fundraiser hosted by Bill Maher. Each audience member contributed to help him earn back the million dollars he donated to the campaign.

Like Mort, Bill’s comedy often stirs up controversy and has offended every group imaginable. Bill Maher does not roar as loudly as Mort Sahl, but he gets his point across and if you get it, you get it, if not; oh well. Molt once said that being narrow minded you’ll never be lonely, and if you are, you will never enjoy a Bill Maher stand up routine.