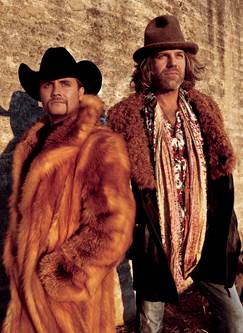 Big & Rich will headline the 2020 Seminole Tribal Fair and Pow Wow on Sunday, February 9, at 3 p.m. in the Seminole Ballroom at the Seminole Hard Rock Hotel & Casino Hollywood. The show is free to the public.

Big Kenny Alphin and John Rich, better known as Big & Rich, have blazed an indelible mark on modern country music, not simply by breaking the rules, but by setting them on fire. They have captivated a multi-generational community of listeners with their sterling songcraft and recorded performances.

A decade and a half into a storied career, they frequently tour the country for over 100 plus dates, presenting electrifying concert spectacles of ceaseless energy and outrageous personality.

From their 2004 debut, the triple platinum “Horse of a Different Color” and their hit “Save a Horse, Ride A Cowboy,” the duo evolved into one of country music’s most auspicious partnerships. Garnering multiple Grammy, ACM, CMA and CMT Music Award nominations, subsequent best-selling collections include “Comin’ to Your City,” “Between Raising Hell and Amazing Grace,” “Hillbilly Jedi,” and “Gravity” which delivered three consecutive Top 10 hits and their most recent collection, “Did It For The Party,” that debuted at number one on the sales charts.

Big & Rich were honored with the 2016 CRS Artist Humanitarian Award for their support of a spectrum of humanitarian efforts, from visiting individual patients in hospitals, to staging benefit concerts for the Country Music Hall of Fame and the 173rd Airborne Memorial, to their well-documented U.S. and international outreach.

Over the past 12 years, their signature anthem “Comin’ to Your City,” has fired up football fans as the theme song for ESPN College Game Day. The band has expanded their presence immeasurably through music videos and television appearances, including John Rich’s victorious stint as the winner of Celebrity Apprentice when he raised $1.2 million dollars for St. Jude Children’s Research Hospital.