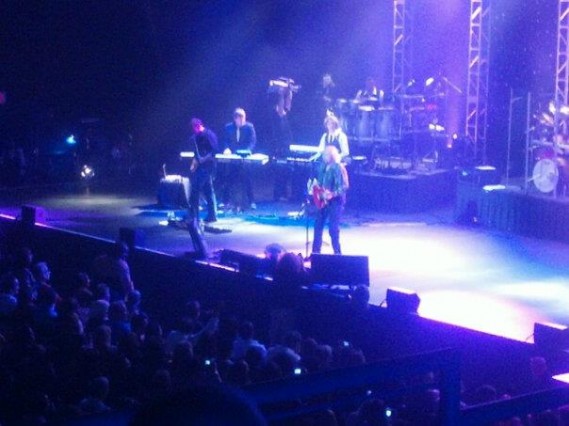 The Bee Gees front-man and Hall of Fame inductee, Barry Gibb has called Miami home for decades, and has been serenading fans at charity events and galas on the local circuit. But has not done a major US concert in years, until now.

On February 21, 2012, Barry took to the stage at the Seminole Hard Rock Casino and Resort in Hollywood, Florida. He seemed at ease but admitted how nerve wrecking the experience was for him, and that he was humbled by the turnout and gracious response from the audience.

In the 70’s and early 80’s, the Bee Gees became a popular household name when they produced the soundtrack for the infamous Saturday Night Fever movie starring John Travolta. I admit I am a bit too young to know much about Barry’s storied career but I have loved and appreciated several songs from his collection like Island In the Stream which he sang with Dolly Parton. Gary on the other hand was able to school me on his music.

The Bee Gees began with three original members and brothers, Barry, Robin, and Maurice who passed on. He also ended the concert with a tribute to his brothers. The group has produced a remarkable catalog of music selling over 100 million records and setting the bar for young artists to follow. Such artists include Destiny’s Child who did a remake of Emotions.

Although the other two brothers were absent, he brought his family in the act. Barry wanted this special concert to be a family affair. He had his son Steven who was a part of the band and also did a solo performance. His niece also joined in with a singular performance.

There was no programmed music or performance from the seven times Grammy-awards winner–it was all coming from the gut. There was a certain reverence from the audience throughout his performance as he received several standing ovations and cheers. “This is just unbelievable, I didn’t expect this. Thank you,” he would often repeat throughout the concert.

This was a rare appearance for the singer who said he had no plans for future concerts and was pleased to accept the invitation when the Hard Rock reached out to him. “I wanted to start out in my hometown,” he said.

He is no stranger to the Hard Rock as his wife is a frequent visitor to the slots in the casino. ” My wife lives here at the casino, she is probably right here gambling, right now, instead of listening to me,” he joked.

There is always a certain level of respect and appreciation when you experience a live performance. And to actually have an opportunity to sit and listen to Barry, the original member of The Bee Gees was very much appreciated.