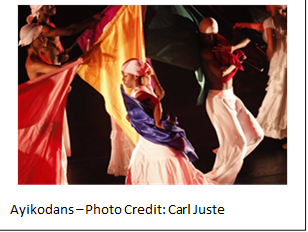 The Adrienne Arsht Center for the Performing Arts of Miami-Dade County has invited AYIKODANS, Haiti’s most prominent artistic export, back to Miami for a triumphant celebration of its 25th Anniversary season. The full company of dancers, drummers and vocalist will perform a program that features two moving pieces created by Artistic Director Jeanguy Saintus – the world premiere of Lamentation 13, a new work paying homage to the company’s history, and Eritaje 25, a compilation of repertory pieces representing 25 years of AYIKODANS.
Performances take place in the Carnival Studio Theater (Ziff Ballet Opera House) on February 15 at 7:30 p.m.; February 16 at 2 p.m. and 7:30 p.m. and February 17 at 2 p.m.

Tickets for AYIKODANS are $35* and may be purchased through the Adrienne Arsht Center box office by calling (305) 949-6722, or online at www.arshtcenter.org. Tickets go on sale to Arsht Center Members beginning December 10 and to the general public on December 17.

AYIKODANS first premiered at the Arsht Center when the Center’s President/CEO John Richard and prominent community leaders joined forces to save the dance troupe after the devastation of the 2010 Earthquake in Haiti. Since then, the stunning ensemble based out of Port Au Prince has received international media attention and has performed in Dominican Republic, Cuba, and in Amsterdam, where the company performed for Queen Beatrix of The Netherlands for 700 VIP international guests.

In addition, founder/artistic director Jeanguy Saintus set a piece on the Cleo Parker Robinson Dance Ensemble which premiered at Lincoln Center’s prestigious Out of Doors festival in 2012. Saintus is the recipient of a 2008. Prince Claus Award.

*All programs, artists, ticket prices, availability, dates and times are subject to change without notice. Visit www.arshtcenter.org for up-to-date information for details and schedules.