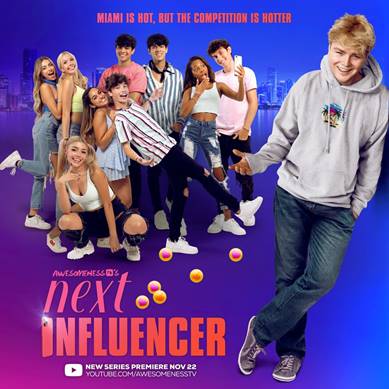 WHEN: Sunday, November 22, 2020 at 10am PT only on the @AwesomenessTV YouTube channel, with new episodes weekly.

SERIES LOGLINE: Hosted by Hype House star Alex Warren, AwesomenessTV’s Next Influencer will follow Project 305, a group of young Miami-based TikTokers who are joining forces to create content 24/7, living under one roof, in the pursuit of stardom. Over 10 episodes, AwesomenessTV’s Next Influencer will give viewers an inside look at what life’s really like living independently for the first time with the working demands of being a rising influencer. Any day could be their day to become the internet’s newest obsession, and Awesomeness will be there for the ride.

ABOUT AWESOMENESS: Awesomeness, a subsidiary of ViacomCBS, is a media company focused on serving the global Gen Z audience through its digital publishing, film and television studio divisions. Awesomeness has become the destination for youth culture, cultivating a loyal audience with hit programming on the world’s biggest streaming services including Netflix (smash-hit film series “To All The Boys I’ve Loved Before,” “Trinkets”) and Hulu (Emmy® award-winning “Zac & Mia”, Emmy® nominee “Pen15”),  along with the company’s immensely popular short-form programs on YouTube (“Brent Rivera’s Dream Vacation,” “My Dream Quinceañera,” “Twin My Heart,” “Niki & Gabi Take Bahamas,” “VS”), that garner hundreds of millions of views. As a leading media brand, Awesomeness’ worldwide distribution footprint spans owned, social and premium SVOD platforms. The company also includes a creative agency, creator network, and brand partnerships division. Founded in 2012, Awesomeness is headquartered in Los Angeles, with additional offices in New York.