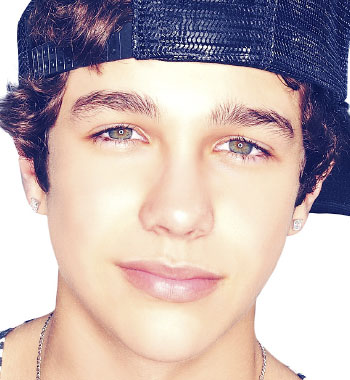 Austin Mahone may only be 17 years old, but this teen pop sensation is already taking the music scene by storm and he recently announced his first headlining tour, presented by MTV’s Artist to Watch and kicking off October 17th at the Fillmore Miami Beach.  Austin  Mahone and the tour opener, Becky G, have both been featured as MTV’S Artist to Watch. Midnight Red and W3 the Future will also be featured openers on the tour.

He has had a whirlwind of a year, with his newest single “What About Love,” sailing to the iTunes Top 5 within the first week of its debut and his single being named the Most Added at Top 40 across the country for four weeks in a row, including major markets and stations like Z100 in New York City and KIIS in Los Angeles. And now, Austin can say he is officially an MTV Video Music Award nominee, being nominated for his very first VMA in the Artist To Watch category.  Most recently, Austin was a presenter at the 2013 Billboard Music Awards and opened the 2013 Radio Disney Music Awards with explosive performances of “Say You’re Just A Friend” and “Say Somethin.” That night, he also took home his first RDM award for “Ultimate Breakout Star – Biggest Viral Artist.”  Currently, he is on tour with Taylor Swift’s RED Tour and readying the debut of his album.