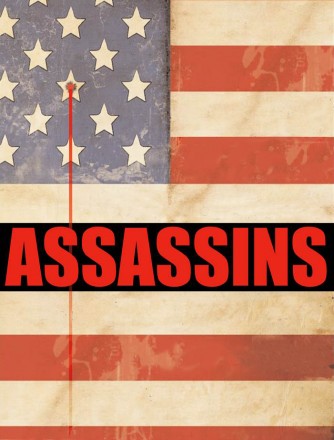 Music and lyrics by Stephen Sondheim

“Sondheim’s astonishing score takes staples of American folk, pop and ceremonial music and turns them inside out!” – The New York Times

Winner of five 2004 Tony Awards including “Best Revival of a Musical,” ASSASSINS is the show that gives new meaning to the phrase “killer musical.” With a stylish Stephen Sondheim score and a provocative book by John Weidman, ASSASSINS brings to the stage a (shooting) gallery of some of history’s most notorious players—the men and women who have attempted to kill American presidents.

This striking work looks at the lives, loves and lunacy of nine American assassins, including John Wilkes Booth, John Hinckley, Lee Harvey Oswald and Lynette “Squeaky” Fromme. Both serious and satirical, the musical asks what hunger drove these people to their actions and what binds them all together. Is that drive what makes them quintessentially American?