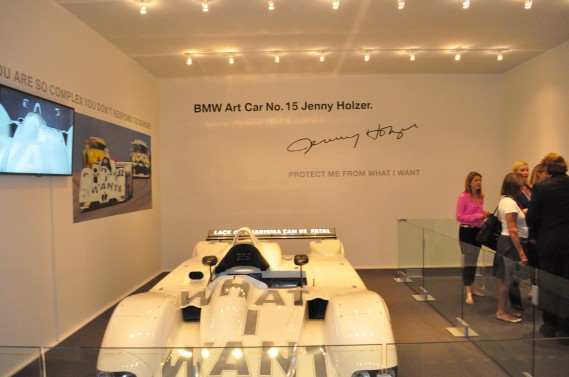 One of the godfathers of pop art, Andy Warhol has shaped the way in which we view art and its association with the automobile industry, giving them a direct link to the art world.

The BMW brand does not only represent sponsorships at fairs, but has a strong and storied involvement in cultural development as well. They combine art, culture and artist with their products as the canvas to showcase varied talents and stimulating artistic expressions.

Over the years the brand has become more successful internationally with the very best in contemporary artists to design mobile art. During these collaborations, artists are given artistic freedom to create something beautiful and unique that complements the BMW tradition of speed and form.

With the mantra, “The Ultimate Driving Machine,” BMW brand has won fans globally with its speed machines. Now the Motorsport brand has aligned itself with the arts and Art Basel Miami Beach causing a distraction with its art initiative which included a mini collection of pop art design on some of its classic and modern cars.

Over three decades BMW has worked with a selected group of respected artists to place permanent signatures on some of their prized products. Among the masters Andy Warhol, Alexander Calder, Frank Stella and Robert Lichtenstein are kings.

BMW demonstrated a fusion of art and technology by displaying four of its 17 cars from the BMW art car collection during art Basel Miami beach. Thus highlighting its cultural commitment.

Andy Warhol was the first artist who depicted the true tradition of the BMW culture on his car. His design gave a vivid depiction of speed at the center of his design during the pop art era.

On the main stage inside the Collectors Lounge, BMW commissioned artist, Jenny Holzer made her thoughts on racing sport known on the hood and tail of her V12 LMR car. The car which was designed in 1999 had various inscriptions all over, including the surrounding wall. Phrases included “Lack of Charisma Can be Fatal.” The car was not only a show piece, but had a history of competing in the Le Mans 24 hour race. Also on display along the wall was a miniature fleet of all the cars in the BMW Art Car Collection.

In an open space across the Convention Center at the Miami Beach Botanical Gardens was an artistic explosion and a presentation of form and color with three BMW classic cars fully designed as art show pieces. On display were the Frank Stella, Alexander Calder and Robert Rauschenberg designs.

The BMW 3.0 CSL graph paper design, a Frank Stella design was the only art car to have participated in two real races, the Le Mans and Manufacture’s World Championship in Dijon in 1976.

Alexander Calder’s 1975 design of the BMW 3.0 CSL 6 cylinder was also in line and was the first art car to be commissioned by BMW.

Robert Rauschenberg the Texan artist with German and Indian roots once said that designing his car was difficult, and described it like being alone with a virgin. His car was on display as well. “It was like being alone in a room with a beautiful virgin,” he said.

His BMW 635 CSI was designed in 1986 after the pop art era with a prominent image on both sides in black and white. It was a reproduction of an old master piece. The driver door was decorated with the face of a young, confident nobleman, a portrait painted by Florentine mannerist Agnolo Bronzino in 1530. The passenger side depicted a female beauty; a lady lying naked on her bed known as an odalisque, a turban wearing servant in the Sultans harem, painted in 1814 by Jean Dominique Ingres.

All four cars presented were a part of the BMW traveling car collection or museum on the road. They can be seen in exhibitions in the Louvre in Paris to the Guggenheim museum in New York.

Cars from the BMW art collection are not for sale and will not be sold by the BMW group. Instead they will continue to be on display around the globe as an art presentation and collection with respect for the artists. The collection, is a unique expression where old masters are revived on modern vehicles which acts as a mere canvas carrying the artists image while still maintaining the original form of the vehicles aesthetic beauty. It does not distract, instead it accentuates the car.