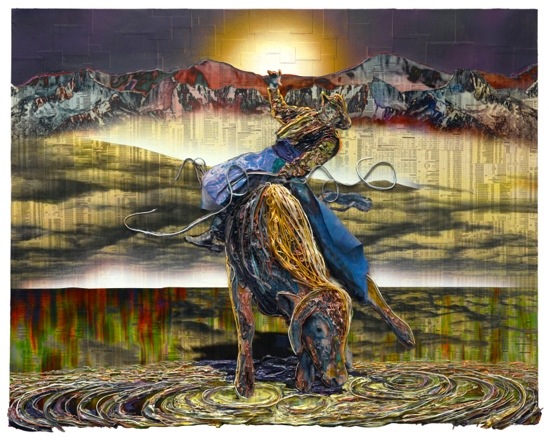 British art has always had a distinctive quality perhaps stemming from the mix of post-Empire eclecticism with a touch of eccentricity. ‘Art Britannia’ is an Art Basel Miami satellite exhibition curated by Londoner Ben Austin and produced by Karelle Levy, a Miami resident. The event explores contemporary practice from UK with an emphasis on painting and craft. The exhibition features a ‘mini show within a show’, taken directly from The Lion and Lamb Gallery’s ‘Summer Saloon’ exhibition.
The Lion and Lamb is an artists run space, located in the back of an East End pub.

The British are well known for having an idiosyncratic penchant for experimentation and exploration. In art throughout the 20th Century the British have constantly pushed boundaries be it with the advent of Modernism through to the beginnings of Pop, with artists like Richard Hamilton, David Hockney and Sir Peter Blake before the genre took off to New York with Warhol and Co. This set up a cultural dialogue between the old and new worlds, which still exists today.  By the 70’s and 80’s British artists continued be progressive and taboo breaking with the likes of Gilbert and George becoming ‘living sculptures’ and are now considered ‘national treasures’.

By the 90’s a new wave of artists appear on the scene, graduates from Goldsmiths with plenty of attitude and with the backing of the Charles Saatchi become universally known as the yBas (Young British Artists). Damien Hirst, Tracey Emin and Sarah Lucas grabbed headlines with art that shocked and amazed in equal measure.
Pickled sharks and unmade beds surrounded by detritus created a new visual language laced with Post-Modern motifs. This art was bursting with bravado and possessed a visceral quality that demanded attention.

Twenty-five years on, ‘Art Britannia’ takes a rather different view. This is an exhibition that proudly celebrates craft, technical skill, mark making and gestures. An art with an alternative aesthetic, where the process is critical to the practice, be it through the act of painting or through considered constructions.   ‘Art Britannia’ has no over arching theme, no curatorial dictate, merely a commitment to work that reflects a subtle yet seismic shift in British contemporary practice.

Here we have bold and elemental abstractions, richly saturated landscapes, nude figure painting, romantic visions, unsettling video work and a mechanical construct.   The group is a healthy mix of slightly older, more established artists together with the next generation of recent graduates who are already appearing in important collections and shows.