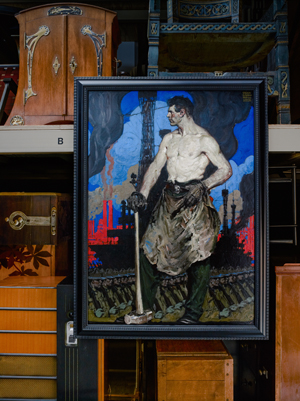 Art Basel Miami Beach turns eleven this year—from December 6–9 art will simply explode here, with Art Basel as the nucleus of an ever-expanding art-infused organism that essentially consumes Miami. The only logical approach is to surrender, by which we mean: See and do and go and experience as much as possible. Your starting point? The Wolfsonian, of course. The museum joins the celebration with two major exhibitions that investigate the role of the worker.
On Friday, December 7 from 8 to 11pm The Wolfsonian hosts a party celebrating Describing Labor (December 3, 2012–April 7, 2013) and Postcards of the Wiener Werkstätte: Selections from The Leonard A. Lauder Collection (November 15, 2012–March 31, 2013; featured above). Also on view in The Wolfsonian’s Bridge Tender House is an installation by Bhakti Baxter, Untitled ([construction of good]). The event features music by DJ Hottpants and is open to Art Basel and Design Miami VIP card holders and Wolfsonian Diplomat-level and above members.
Describing Labor explores our relationship to the labor that forges the physical world and to the figure of the worker. The worker was pictured widely and heroically during the Great Depression, the Soviet Revolution, and the two World Wars but is not readily present in the contemporary visual landscape. In Describing Labor, which was commissioned and organized by The Wolfsonian, internationally renowned artist Esther Shalev-Gerz utilizes video, audio, photography, and text to give voice to these otherwise silent figures and to encourage a new awareness of the human endeavor that shapes our daily lives. Miami-based artist Bhakti Baxter is one of the twenty-four participants in Describing Labor—his installation, Untitled ([construction of good]), is informed by that experience. He notes that as with other objects in The Wolfsonian’s collection, the Bridge Tender House (1938–39), originally located on the Miami River’s NW 27 Avenue Bridge and now positioned on the sidewalk in front of the museum, “can help us to think through the complexity of such fundamental ideas as ‘good’ and ‘mankind’ by demonstrating how the meanings of things are perpetually shaped by their human and historical contexts.”
Describing Labor is made possible by Gary L. Wasserman. Additional support received from the Adam Sender Charitable Trust, The Arthur F. and Alice E. Adams Foundation, and United Airlines, the Official Airline of The Wolfsonian–FIU.