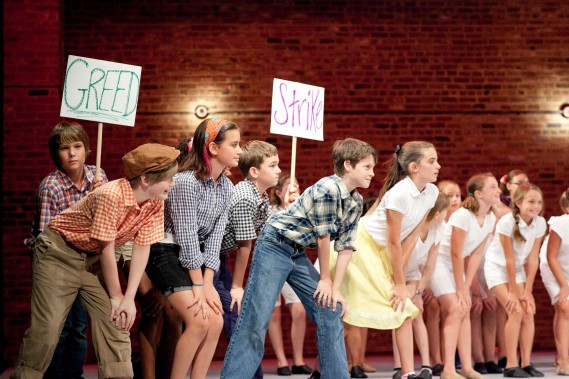 The Adrienne Arsht Center for the Performing Arts of Miami-Dade County is proud to announce its inaugural CAMP BROADWAY MIAMI in partnership with Camp Broadway, an industry leader in theater arts camps, educational programming and special events since 1995. CAMP BROADWAY MIAMI, an immersive summer camp for theater-loving kids offering enriching, hands-on experience in theater, song and dance, joins New York City, Las Vegas, Atlanta and other destinations as the eleventh city chosen to host this special program. CAMP BROADWAY MIAMI runs June 16 through June 20, 2014 and is open to ages 10 to 17. The week-long camp will culminate in a special finale performance on Saturday, June 21 as part of the ArshtCenter’s popular FREE Family Fest series. CAMP BROADWAY MIAMI welcomes all skill levels; no prior experience is required to enroll.

“This summer, the Arsht Center will offer South Florida children a taste of what it takes to become a Broadway star,” said John Richard, president and CEO of the Adrienne ArshtCenter. “As part of our ongoing efforts to provide the community with signature educational programs that showcase the power of the performing arts, we’re thrilled to be the home of the first-ever CAMP BROADWAY MIAMI. We cannot wait to engage young people in the magic of musical theater this summer!”

CAMP BROADWAY MIAMI enables kids with an interest in the arts to develop their confidence, character and presentation skills through ensemble performance. During this program, campers will be immersed in an authentic Broadway rehearsal process that allows them to be successful regardless of experience level. Inspired by Broadway’s cherished works and steeped in its grand traditions, the camp is designed to build confidence, inspire creative expression, and instill well-being in both aspiring artists and future audiences.

CAMP BROADWAY MIAMI programs are non-competitive and ensemble based. A typical session includes master classes in voice, dance and acting, Q and A sessions with industry professionals, and a backstage seminar with a production crew. In addition, campers will have the opportunity to rehearse and perform on four different performance spaces at the Adrienne Arsht Center – the very same stages that multiple theater, music and dance legends have graced – including the Center’s acclaimed John S. and James L. Knight Concert Hall.

Camp attendees will receive official Camp Broadway t-shirts and a “cast of characters” headshot. Master class instructors have Broadway credits; younger instructors have national tour or other professional credits. Local music directors will also be part of the program and will have the opportunity to teach on a national level at future Camp Broadway dates. Directors, choreographers, musical directors, acting coaches and stage crew all contribute to the instruction, providing a holistic view of Broadway production. Camp Broadway continues to build a network of national, professional theaters to encourage youth participation in the performing arts. Camp Broadway celebrates its 19th year of operation in August.