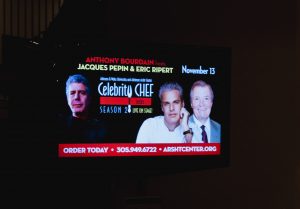 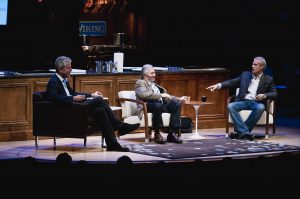 The one and only Anthony Bourdain hosted an exquisite evening with two celebrated master chefs on November 13, 2009 at the John S. and James L. Knight Concert Hall. One of the world’s best-known French chefs, Emmy winner Jacques Pépin has been honored with France’s Légion d’honneur, cooked with Julia Child and is the author of “La Technique,” widely considered the bible of the fundamentals of French cuisine.

A chef and co-owner of New York’s acclaimed Michelin 3-star-winning Le Bernardin, Eric Ripert is a frequent guest judge on Bravo’s “Top Chef,” and the mastermind behind a series of brief online cooking videos called “Get Toasted,” which focus on easy and quick meals that can be prepared in minutes with a toaster oven. Exclusively for the Adrienne Arsht Center’s Celebrity Chef Series, culinary masters Pépin and Ripert were surprised with a basket of mystery ingredients where they face off in a simultaneous cooking demonstration live on stage.