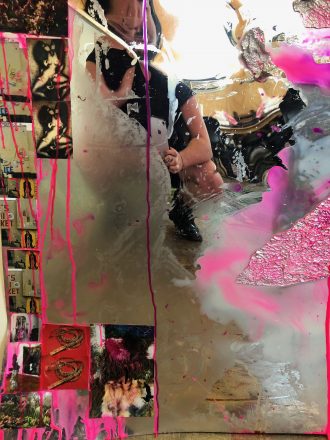 Nina Johnson Gallery is proud to present Accidental Pictures, an exhibition of new works by Anna Betbeze, opening on October 3 with a public reception (6-8 pm), and remaining on view until October 26th. Created on silver Mylar with a variety of synthetic pigments, this new body of work continues Betbeze’s exploration into the properties of uncertainty and entropy. Moving amongst the reflective works, viewers find themselves entangled in a dance of creation and degeneration as the play of light on the reflective works subverts the stability of the image.

Made on the floor of Betbeze’s studio, a former auto body shop in Los Angeles, the works are the result of dripping, staining, pooling materials—acrylics, silicon, resin, and more. Just as the Mylar allows for the disintegration and creation of disparate images, or views, as light moves across its surface, these works are fundamentally heterogeneous. From one angle, they behave like industrial accidents: something spontaneous, unplanned, with equal parts humor and menace. From another, they’re in conversation with the tradition of illusionism in art history, whether in painting or photography. Locally they refer to Finish Fetish, hot rod car culture, fun house mirrors, perhaps even the temporary vistas of Hollywood set design.

At first glance, Accidental Pictures seems to negate the formal gambits of Betbeze’s previous work involving Flokati rugs. Created out of natural dyes absorbed into shaggy wool, those sculptural works tumble from the wall out into the gallery. These new works allow the image to retreat into the picture plane while material sits on the surface. And yet both deal with notions of entropy, as well as Betbeze’s interest in color. Light, far from illuminating, turns into a bleaching glare. They are felt, rather than seen, moving through boundaries: the image plane, the gallery space, the body of the viewer.