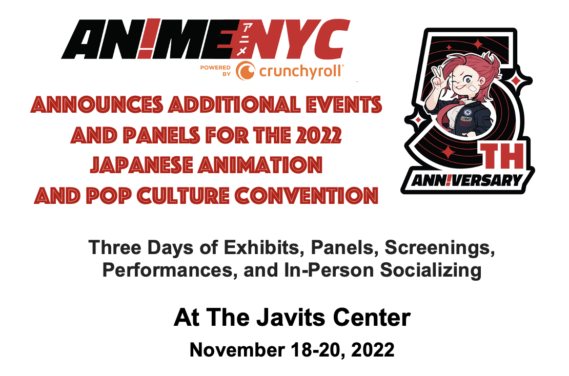 Celebrating its 5th Anniversary this year, the convention features three days of over 400 exhibits, exclusive screenings, extensive panels, performances, and appearances by some of the biggest creators in Japan, all under one roof. Over 200 hours of programming is planned for the weekend.

This year, over 50,000 fans are expected to gather at Anime NYC from all 50 states and 27 different countries. Countries include: Canada, Mexico, England, France, Germany, Australia, China, Brazil, and Japan.

Anime NYC was founded in 2017 and has quickly become the fastest growing anime convention in the US, second only to Anime Expo which welcomes 100,000+ attendees in Los Angeles. Anime NYC has presented the largest Japanese concerts in NYC history and global premieres, before even Tokyo.

There are a variety of scheduled events throughout the three-day celebration for Anime NYC. All events take place at the Javits Center. Full details on programming can be found HERE.

Gundam is a science fiction series often called the “Star Wars of Japan”. Spanning over 40 years and dozens of television shows and movies, it is one of the longest-running and most-culturally-resonant anime sagas of all time, and a live-action Gundam is currently in devolvement by Legendary Pictures and Netflix.

To celebrate Gundam’s appeal both in Japan and around the globe, Anime NYC will be host to “Gundam Expo USA 2022”, three days of special events, guests, screenings, and exclusives inside Anime NYC.

The biggest event at Gundam Expo USA will be an official Guinness World Records attempt to build he most Gundam model kits. This special event begins at 11:30 AM on Saturday and is headlined by Adam Savage of MythBusters and Tested fame!

The anime Trigun took the planet by storm in 1998 when it told a literal out of this world science fiction Western. Still beloved by fans today, it will be getting a reboot from famed animation team Studio ORANGE. Fans at Anime NYC can be the very first people on the planet to see this all-new Trigun at 6 PM on Friday night!

Crunchyroll, the global brand creating the ultimate anime experiences, is returning to Anime NYC this November with a huge slate of content. Fans can enjoy premieres of some of its biggest upcoming events before anyone else.

o  The Iceblade Sorcerer Shall Rule the World

o  The Reincarnation of the Strongest Exorcist in Another World

o  The Tale of Outcasts

Terminal 5 will be dressed in the aesthetics and soundscapes of 1999 for a celebration of anime and music with the Anime Y2K Party on Saturday, November 19th in New York City. Party goers will be transported into a slice of the Tokyo nightclub scene circa the 1990s with live music, photo ops, and games.

Hit DJs from around the world will spin an end of the millennium worthy celebration of anime music. The lineup includes:

• JVNA: Playing at the dichotomy of light and dark, singer-songwriter and multi-instrumentalist JVNA produces electronic pop with a melodic bass edge. She emerged in 2016 with anime and video game themed covers alongside her originals. Her first album was released in 2021, mixing pop, rock, melodic bass with honest and emotional lyrics.

• TEDDYLOID: A Japanese electronic music producer and DJ. He is known for producing many songs on the soundtrack of Panty & Stocking with Garterbelt, which charted on the Oricon Albums Chart. He has performed on stages all over the world with notable performances at Ultra Japan and Anime Expo.

• D-YAMA: opened MOGRA in 2009. Since then he has brought MOGRA’s anime club scene to an international audience through tours in US and Germany, as well as Twitch streams.

• DJ WILDPARTY: is a Japanese DJ and resident DJ at MOGRA, he has partnered with various vocaloid talent and his tracks have been featured in THE IDOLM@STER MILLION LIVE.

Anime NYC welcomes guests from across the US and Japan. The most up to date guest list can be found HERE.

The schedule for the weekend is as follows:

10 AM to 4 PM – Panels, Screenings, and Special Events

“With Anime NYC beginning this weekend, we are excited to share more exciting news with updated programming and additional guests added,” said show director Peter Tatara. “We are grateful to our partners and sponsors whose support has enabled us to bring our attendees the best of the Anime world, all under one roof.”

For more information about Anime NYC and to purchase badges for the convention, please visit: www.AnimeNYC.com.

Tatara has spent over 15 years in the live event space, helping to build experiences for audiences around the US and across the globe in countries including England, France, Germany, India, Singapore, and Australia. An anime fan since he was a child, Anime NYC is his dream come true.

·      All Anime NYC participants who are 5-years-old or older are required to show proof of vaccination or a negative COVID-19 test result to attend. Your proof of vaccination or negative COVID-19 test will be checked once upon your first arrival at Anime NYC, after which you will be given a wristband confirming your vaccination or negative test status has been verified. Keep this wristband on during all your time at Anime NYC. A guest is fully vaccinated if he/she has had two shots of the Moderna or Pfizer vaccines or 1 shot of the Johnson and Johnson vaccine.

·      All attendees, exhibitors, guests, staff, crew, and all others 2-years-old or older entering the Javits Center must wear masks, and alll face coverings must properly cover your nose and mouth.

·      Anime NYC is a large gathering, and vaccinations or negative COVID tests as well as face coverings are for the health and safety of all participants. We unfortunately cannot make exceptions for individuals.