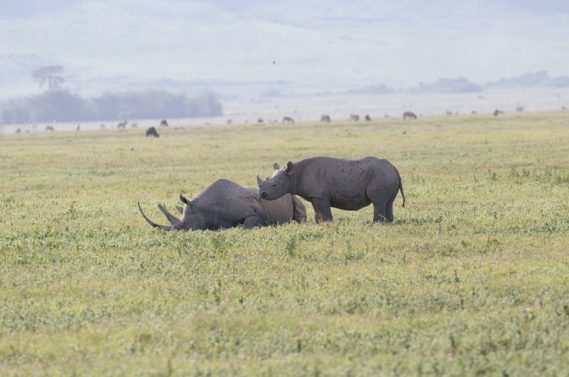 Rhinos are currently poached at a rate of one every ten hours. Join andBeyond on September 22 for a conservation conversation with leaders from the industry.

Conservation-focused safari outfitter, andBeyond, is honoring World Rhino Day with a live virtual panel on September 22, 2020 at 10:00am EST. The one-hour discussion will bring together rhino conservationists from leading groups around Africa, including Great Plains Conservation and WWF, to raise awareness for the cause on this international day of recognition.

The following participants will discuss their learnings and strategies to protect and conserve this highly threatened species, knowing that their combined efforts are more effective than working alone.

*With this virtual format, viewers will be able to ask questions and make comments in real time.

andBeyond’s impact by the numbers:

White rhino were the first endangered species to be reintroduced to andBeyond Phinda Private Game Reserve in 1991. They have since flourished to the extent that the African Rhino Specialist Group now considers this to be one of South Africa’s most important white rhino reserves. For a sneak peak, check out the Instagram of the Conservation Manager at andBeyond Phinda, Simon Naylor.

andBeyond designs personalized high-end tours in 13 countries in Africa, five in Asia and four in South America, offering discerning travelers a rare and exclusive experience of the world as it should be. andBeyond owns and operates 29 lodges and camps in iconic safari, scenic and island destinations in Africa and South America. This enables them to positively impact more than nine million acres of wildlife land and 2,000 kilometers of coastline.

Established in 1991, andBeyond strives to leave our world a better place than we found it through care of the land, wildlife and people, and the delivery of extraordinary guest experiences. andBeyond has established an intimate relationship with some of the world’s last remaining unspoiled natural places and the communities that surround them. In combination with their highly skilled guides and rangers, this allows them to deliver extraordinary guest experiences that feel profoundly meaningful.