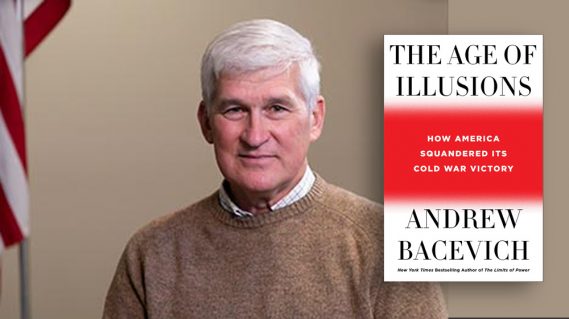 Lunch with the Prologue Society
Friday, January 24, 12pm
The Kislak Center at the University of Miami
Otto G. Richter Library

*This event is hosted by The Prologue Society on campus at The University of Miami. Tickets include admission for one (1) guest, buffet lunch and a copy of the book. The Prologue Society, founded in 1992, is a not-for-profit organization that hosts approximately seven luncheon events each year, from September to May in South Florida. Members meet to listen to writers and historians of local, national, and international stature discuss their recent books. Each season brings a wide variety of topics that span time, geography, cultures and disciplines.

Andrew J. Bacevich is professor emeritus of history and international relations at Boston University. A graduate of both the U.S. Military Academy and Princeton University, he served in the U.S. Army for twenty-three years. His recent books include The Limits of Power, America’s War for the Greater Middle East, and Twilight of the American Century. His writings have appeared in the New York Times, the London Review of Books, and the American Conservative, among other publications.

In The Age of Illusions (Metropolitan Books, $27), Bacevich takes us from that moment of seemingly ultimate victory to the age of Trump, telling an epic tale of folly and delusion. Writing with his usual eloquence and vast knowledge, he explains how, within a quarter of a century, the United States ended up with gaping inequality, permanent war, moral confusion, and an increasingly angry and alienated population, as well, of course, as the strangest president in American history.

Become a Member & Get Tickets