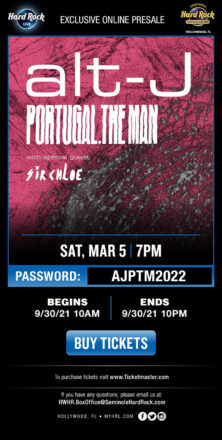 alt-J and Portugal. The Man are Coming to Hard Rock Live

The Mercury Prize-winning, multiple GRAMMY and BRIT Award-nominated band alt-J have announced their eagerly awaited fourth album “The Dream” set for release Feb. 11, 2022, via Canvasback / Infectious Music. The band’s new single “U&ME” is out now. “U&ME” is produced by long-time collaborator Charlie Andrew and is the band’s first new music since their acclaimed third album “RELAXER” released in 2017.

alt-J are one of the most successful British bands of the millennium. Joe Newman, Gus Unger-Hamilton and Thom Green have released three studio albums that, between them, have sold in excess of two million copies and their songs have been streamed more than two billion times. Their 2012 Mercury Prize and Ivor Novello Award-winning debut “An Awesome Wave,” was followed two years later by their UK number one, GRAMMY and BRIT Award-nominated album “This Is All Yours.” Released in 2017, “RELAXER” flew straight into the top 10 of the UK album chart ahead of a summer of major international shows, including a headline show at London’s O2 Arena and headline performances at numerous festivals. “RELAXER” also became their second album to be nominated for the Mercury Prize.

Over the past decade, Portugal The. Man has established themselves as one of rock’s most prized possessions and a live phenomenon with more than 1,600 shows under their belts and a storied reputation as festival favorites. Originally from Alaska, the Portland-based band, comprised of John Gourley, Zach Carothers, Kyle O’Quin, Eric Howk, Jason Sechrist and Zoe Manville, soared to new heights in 2017 with the release of their RIAA certified-gold album, “Woodstock.” The album was marked by the astounding success of their infectious single “Feel It Still,” which earned the group a plethora of new accolades, including a GRAMMY Award for “Best Pop Duo/Group Performance,” a six-time RIAA platinum certified single certification, a record setting 20-week residency at No. 1 on alternative radio, and an inescapable presence on the Top 40 airwaves.