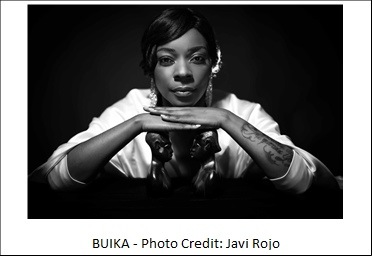 For her anticipated return to the Arsht Center stage, Latin Grammy Award-winning flamenco fusion vocalist BUIKA will perform a sensual and eclectic concert complete with hits and songs from her new album La Noche Más Larga on December 1, 2013 at 8:00 p.m. in the acoustically superb John S. and James L. Knight Concert Hall.

Originally from Mallorca, Spain, BUIKA is frequently compared to diverse singers such as Nina Simone, Chavela Vargas and Cesaria Evora, but has created a sound completely her own – with a voice described as ‘velvet gravel.’ Her musical repertoire embodies a sublime cross-cultural fusion of styles – mixing the traditional Spanish genre of classic coplas, boleros, and rumbas with jazz, soul, and popular dance rhythms. With La Noche Más Larga (The Longest Night, 2013), the artist’s latest and first self-produced album, BUIKA continues to knock down the walls that surround flamenco – the root source of everything she does, but a tradition that can’t contain her ever-expanding vision.