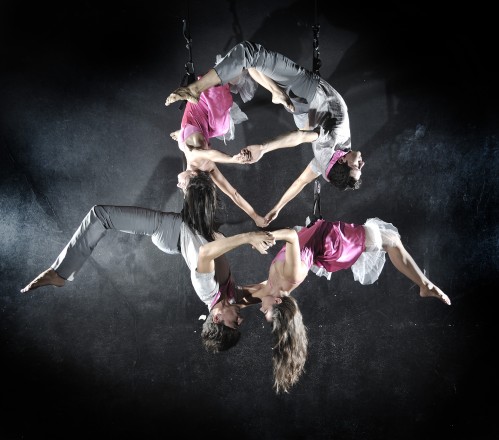 8CHO will play Thursday through Saturday evenings at 8 p.m. with a Saturday matinee at 2 p.m. Performances on Sunday are at 5 p.m.

Created in Buenos Aires, 8CHO is a thrilling aerial spectacular that has been performed in multiple cities around the world in just three years. For the show’s South Florida premiere, the Arsht Center’s Ziff Ballet Opera House will be transformed into a “sexy, exhilarating, gravity-defying world” (Ottawa Citizen) by various dancers and musicians who perform entire routines in the air. Suspended on ropes, and soaring up to 20 feet above the stage, performers leap, swivel and fly through the air, creating a sultry kaleidoscopic of movement and action. 8CHO will also fascinate audiences with its achingly cool, original acoustic and electronic tango-infused score composed by Juan Pablo Arcangeli and Martin Ghersa, who is also a member of the live onstage orchestra.

“Things get hot in Miami during the summer, and the Arsht Center’s summer shows are no exception! Local audiences of all ages have enjoyed presentations of smash-hit shows such as The Donkey Show, Cirque Eloize iD and Fuerza Bruta,” said Arsht Center President and CEO John Richard. “In 2013, we continue our exciting tradition of summer blockbusters and heat things up with 8CHO. For its Miami premiere, Brenda Angiel will surely wow audiences with a high-flying show that will make spines tingle and spirits soar!”

Incorporating the various rhythms of Argentina’s most beloved musical style and inspired by a famous tango step by the same name, 8CHO was created by Argentina’s superstar choreographer Brenda Angiel – who was called “the most choreographically inventive aerial dancer I have ever encountered” by The New York Times dance critic John Rockwell – and is performed by the virtuosic Brenda Angiel Aerial Dance Company.

Brenda Angiel and her company have traveled the world, performing in 10 countries, including the Netherlands, Italy, Mexico, Canada, Colombia, Costa Rica, Chile, Argentina and the United States. The marvelous dancers have lept off the sides of Argentina’s most famous art deco buildings during Buenos Aires Night of Museum (2010); dazzled New York audiences during a three-week run off-Broadway at the 42nd New Victory Theatre (2012) and performed for more than 60,000 people at the renowned XII Festival Iberoamericano de Teatro de Bogotá in Colombia.

Brenda Angiel Aerial Dance Company has also performed at some of the most prestigious festivals in the United States, including the Spoleto Festival and Kennedy Center’s Americartes Festival. Most recently, the Company received a coveted invitation to perform at the 2013 American Dance Festival in July – making it the Company’s fourth performance at the prestigious festival.