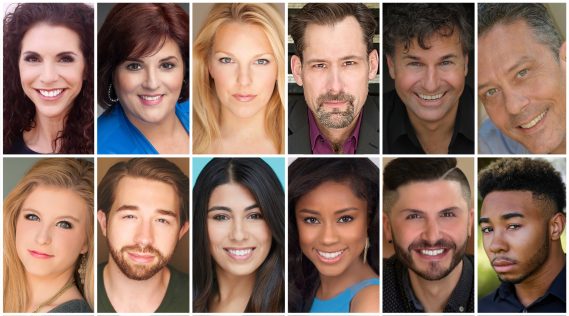 Actors’ Playhouse is thrilled to announce the complete cast for its production of global smash-hit musical Mamma Mia! playing January 22 – February 23, 2020 at the Miracle Theatre.

Over 60 million people worldwide have fallen in love with the characters, the story and the music that make Mamma Mia! the ultimate feel-good show. This sunny and funny tale unfolds on a Greek island paradise. On the eve of her wedding, a daughter’s quest to discover the identity of her father brings three men from her mother’s past back to the island they last visited 20 years ago.

A large cast, non-stop laughs and explosive dance numbers, told through the story telling magic of ABBA’s timeless songs, propel this enchanting tale of love, laughter and friendship into one of the most unforgettable musicals of all time.

Ticket prices range from $30 to $75. Tickets can be purchased by calling (305) 444-9293, visiting www.actorsplayhouse.org, or at the Actors’ Playhouse Box Office (280 Miracle Mile, Coral Gables, FL 33134). The theatre offers 10 percent off all weekday performances for seniors and $15 student rush tickets to any performance 15 minutes prior to curtain with identification. Group discounted rates are offered for ten patrons or more through the group sales department at (305) 444-9293 ext. 1 or on www.actorsplayhouse.org.

Actors’ Playhouse Artistic Director David Arisco will lead a group discussion with the cast following the performance on January 31, 2020 as part of the company’s “Second Fridays” series.

About Actors’ Playhouse at the Miracle Theatre

DAVID ARISCO (Artistic Director) has been Artistic Director of Actors’ Playhouse for 30 years, twenty-four of them here at the Miracle Theatre. His diverse career spans over 40 plus years as director, actor, musical director, stage manager, symphonic conductor and instrumentalist. Stage acting credits include Edna Turnblad in our production of Hairspray, as well as a starring role in our production of Fiddler on the Roof. Mr. Arisco has directed over 150 shows here at Actors’ Playhouse, including the Carbonell awarded productions of In the Heights (2013), Les Misérables (2009), AIDA (2005), Floyd Collins (2003), Violet (2001), Joseph and the Amazing Technicolor Dreamcoat (2000), I Love You, You’re Perfect, Now Change (1998), West Side Story (1997) and The Mystery of Edwin Drood (1991), all of which won for Best Production of a Musical. In 2009, Mr. Arisco was the recipient of the George Abbott Award for Outstanding Achievement in the Arts.

MARGOT MORELAND (Rosie) is thrilled to be back “home” and revisiting her Silver Palm Award-winning Rosie (Maltz’ Mamma Mia!).  She just closed the world premiere of James Grippando’s Watson at Gablestage. Actors’ Playhouse audiences may remember her from Memphis, It Shoulda Been You, Sondheim On Sondheim, Les Miserables, Bombshells, She Loves Me, I Love You……Now Change, Shear Madness (Kennedy Center and US), or Fiddler On the Roof (starring David Arisco), just to name a few. Margot is a four-time Carbonell award recipient for Ruthless!,  Heartbeats, Tomfoolery and Annie. Ms. Moreland takes great pride in her position on Council for Actors’ Equity Association.

MANDY STRIPH (Tanya) is so happy to be back on the island taking on the role of Tanya for the second time. She has also traveled the country in the National Tours of Memphis and Beauty and the Beast. Regional credits include Violet in 9 to 5, Millie in Thoroughly Modern Millie, and Logainne in 25th…Spelling Bee.

JIM BALLARD (Sam) is happy to be back at Actors’ Playhouse. Other credits include: Million Dollar Quartet, Spamalot, Urinetown, 1776and The Color of Desire. He has been seen at many South Florida theaters as well as in National Tours and other regional theaters across the country.

ED KEMPER (Bill) was last seen as Lank in The Wick’s production of Crazy For You, opposite Joyce Dewitt in Remember Me, the Broadway Tour of The Buddy Holly Story, and played Will Rogers in The Will Rogers Follies at Bucks County Playhouse. Other favorite roles include Che’ in Evita, Paul in Barefoot in the Park and Jesus in Godspell.

MEREDITH PUGHE (Sophie) is thrilled to be making her Actors’ Playhouse debut. Winner of the Broadway World Orlando Best Leading Actress in a Musical award for Newsies (Katherine Plumber) at the Orlando Repertory Theatre. Other credits include: Hairspray (Amber Von Tussle) at American Stage Theatre, I Love a Piano (Eileen) at Winter Park Playhouse, Legally Blonde (Serena/Elle Understudy) and Rock of Ages (Waitress 1/Sherrie Understudy) at Slow Burn Theatre, Grease (Marty) and A Funny Thing Happened on the Way to the Forum (Tintinabula) at MNM Theatre Company, and Crazy For You (Ensemble) at The Wick Theatre. She is employed by Universal Studios Orlando. Next, you can catch her in A Chorus Line (Maggie Winslow) at The Wick Theatre. www.meredithpughe.com

LAUREN HORGAN (Ali) is thrilled to be back at Actors’ Playhouse where she made her professional debut after graduating from FIU with a BA in Theatre. Lauren is a member of the National Dance Council of America and a certified Ballroom instructor. Previous credits include:In The Heights (Vanessa), American Idiot (Heather), Havana Music Hall (Mari), Evita (U/S Mistress/Ensemble). @laurenhorgannn

KALÉA LEVERETTE (Lisa) is thrilled to be making her debut at Actors’ Playhouse after concluding a run of Elf the Musical. Her regional credits include: Godspell, Ain’t Misbehavin’, Big the Musical and Mamma Mia! She holds two Bachelor’s of Science (Biology, and International Affairs) from Florida State University and is pursuing a Master’s at George Washington University. @mission_akamplished www.kalealeverette.com

CONOR WALTON (Eddie) was recently seen in Memphis at Actors’ Playhouse and Mamma Mia! at Maltz Jupiter Theatre. Favorite credits include: Greg 1 in the world premiere musical Now and Then, Hermes in Rock Odyssey at The Arsht Center, Zanna in Zanna-Don’t at Island City Stage, Albert in It Shoulda Been You at Actors’ Playhouse (Silver Palm Award), Thalia in Xanadu at Slow Burn Theatre Company and Felix in The Normal Heart at Outre Theatre (Carbonell nomination and Silver Palm Award). Conor is also a recent Remmy Award-winner for contributions to South Florida Theatre.

ALEXANDRA GRANT (Ensemble) studied dance with Ballet Etudes Company, University Center for the Performing Arts and Florida International University. She is a Teaching Artist at Broward Center for the Performing Arts and has choreographed several public and private school theater productions. She has performed in full-length ballets including Coppelia, Swan Lake, Giselle and Nutcracker, in Guys and Dolls, Anything Goes, R-Cabaret, and has been featured in television commercials. For 10-plus years she has been a principal dancer and youth choreographer for the Emmy Award-winning Fort Lauderdale Christmas Pageant.

ALEX JORTH (Ensemble) is happily making his Actors’ Playhouse debut! Nationally, he has appeared in the Radio City Christmas Spectacular, the Footloose national tour, and at the McCarter Theatre Center, Gateway Playhouse and more. As a resident of Florida, Alex performs across the state with companies such as Asolo Repertory Theatre, Maltz Jupiter Theatre, Palm Beach Dramaworks, Slow Burn Theatre Company, The Wick Theatre, MNM Productions, TheatreZone, The Studio Theatre Tierra del Sol and many others. Alex is a proud Millikin University graduate.

JONATHAN EISELE (Ensemble) is a Florida native who has been performing since the age of 2. He was most recently seen as Tommy Djilas in The Music Man. Other credits include The Wick’s Crazy for You, Stage Door Theatre’s Minnie’s Boys, Slow Burn’s Tarzan, MNM’s Man Of la Mancha, Winnipesaukee Playhouse’s Chicago, and the Off-Broadway production of What I Learned in Fallsburg.

KELLY ZIEGLER (Ensemble) is a graduate of NWSA College where she earned her BFA in Musical Theatre.  Some of her theatre credits include: The Mistress in Evita at Actors’ Playhouse, Crazy For You at The Wick Theatre and Saturday Night Fever at Stage Door Theatre. In addition to performing, her passion is teaching. Kelly has been teaching dance and theatre to children of all ages ever since graduating college in 2015. She has recently opened her own business teaching private voice and acting lessons to children called Showbiz Kids Studio. Follow her business on FB & IG @showbizkidsstudio!

MEG FROST (Ensemble) has been singing, dancing and acting professionally since she was two years old. She has performed in numerous shows, such as: The Little Mermaid (Ursula), Fiddler On The Roof (Chava), A Funny Thing Happened On The Way To The Forum (Philia), Thoroughly Modern Millie (Miss Dorothy) and many more.

NICOLETTE HERNANDEZ (Ensemble) is a recent graduate from the Boston Conservatory where she received her BFA in musical theatre with a dance emphasis. Recent regional and educational credits include West Side Story (Francisca/Understudy Maria), Wizard of Oz(Ensemble/Understudy Glinda) In the Heights (Carla) and Side Show (Dance Captain/Understudied and Performed as Daisy). Represented by Clear Talent Group, Nicolette is currently living in New York City.

ROBBIE SMITH (Ensemble) returns to Actors’ Playhouse after having been seen as Baby John in West Side Story and in the ensemble of Memphis and Havana Music Hall. Robbie has had the honor to work at Goodspeed Musicals, Riverside Theatre, North Shore Music Theatre and Alabama Shakespeare Festival amongst others. Proud graduate of the Hartt School. @rob_robs.

SARAH ROSE KNOCHE (Ensemble) is positively beaming to make her Actors’ Playhouse debut! You may have recently seen her as Anybodys in Prather Productions’ West Side Story at the LPAC. Other favorite roles include Holly/Julia (The Wedding Singer), Audrey (Little Shop), Chris Hargensen (Carrie: The Musical), Little Red (Into the Woods), and a variety of ensemble tracks in the South Florida Theatre community. For more information, visit sarahroseonline.com.