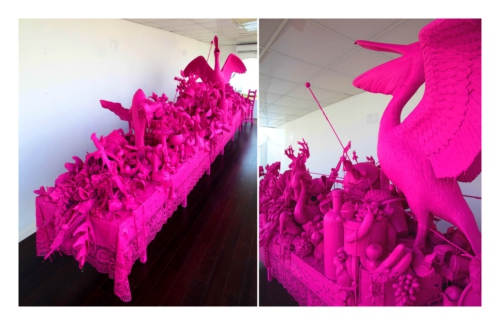 Renowned visual artist Carlos Betancourt, whose artwork has been featured in Art Basel Miami and is part of the permanent collections of the Metropolitan Museum of Art in New York, The Smithsonian National Portrait Gallery and many other prestigious museums and private collections, unveiled his most recent site-specific installation, LET THEM FEEL PINK!,at an exclusive, one-night-only pop-up exhibit in Miami’s Wynwood Arts District, on Saturday, March 10.

LET THEM FEEL PINK!  was commissioned by ABSOLUT® Vodka as part of its series of OUTrageous events that “celebrate 30 years of going out and coming out.”  Coordinated by New York-based curator Claire Breukel, the invitation-only event unveiled Betancourt’s spectacular Schiaparelli-pink installation, a 25-foot table covered in hundreds of objects acquired from Betancourt’s travels throughout Florida — a pop-culture- melange of high heels, crowns, flamingos, garden statuary, souvenirs and kitsch — all coated in gallons of shocking pink resin for a delicious, sexy and  wonderfully disturbing effect.

LET THEM FEEL PINK! was informed by the artist’s meticulous accumulation of seemingly nonsensical elements, artfully piled into a bizarre table  to build a vibrant new cosmology of contemporary art and urban culture. In creating a loopy new strand of aesthetic DNA, Betancourt merges traditional American pop culture with a freshness and relevance that defies current classification through his use of flamboyant use of color and form, and a borderline-perverse inclusion of kitsch and vintage, melancholic references. LET THEM FEEL PINK! evokes Betancourt’s influential works, taking the conceptual art memes of appropriation and deconstruction to unexpected new levels. His artworks are influenced  by a multitude of references, including Oscar Wilde, Auntie Mame, Celia Cruz, Jeff Koons, Neo Rauch, The Bauhaus, Morris Lapidus and trans-Caribbean influences. As Robert Farris Thompson (dean of the History of Art department at Yale University from 1978 to 2010) once said about Betancourt’s artwork “the more he mixes, the more you feel his mind.”