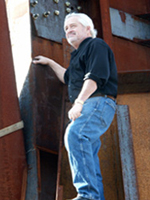 For the first time ever, art admirers can dive into the world of John Henry. While Henry’s pieces are pictured in numerous internationally-recognized publications, textbooks and art books, this is the first book of its kind dedicated solely to the work of John Henry.

JOHN HENRY lives in Chattanooga, TN. He has shown his work extensively since the early 1960’s and exhibits a definitive trademark style that is recognized internationally. His works range in scale from small tabletop pieces to some of the largest contemporary metal sculptures in the world. The geometric forms that have defined John’s work for more than forty years have their aesthetic and historical base in Constructivism. John has a supreme commitment to the materiality of his work, and an unwavering insistence on maintaining the integrity of the process and the materials in developing his visual vocabulary.