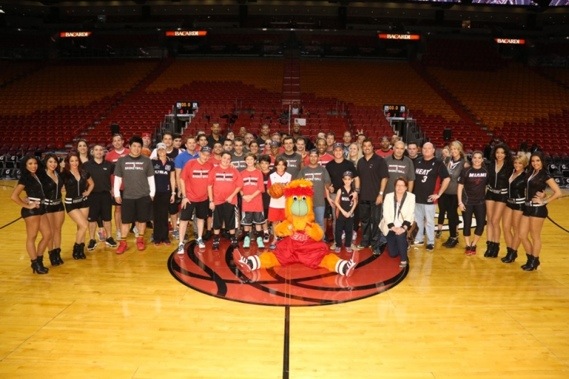 Hublot – Swiss luxury watch manufacturer – celebrated the continuation of its partnership with Miami Heat guard, Dwyane Wade with a basketball clinic at the American Airlines Arena and a private dinner at Prime 112, one of Miami’s celebrity hotspot.

The Swiss watchmaker took the watch industry by storm with its smart marketing strategies and associations with some of sporting elite and entertainers. A champion amongst champions, Hublots partnerships include famous celebrity athletes and musicians as its ambassadors such as Chinese star Jet Li, NBA superstar Kobe Bryant, world’s fastest runner Usain Bolt and football club Paris Saint-Germain.

“I am honored to join the esteemed list of Hublot ambassadors, an international collection of the best in sports,” said Wade. “Hublot and I share a common commitment to excellence, which I strive for on and off the court. Their unique designs and my interest in fashion make this a perfect collaboration.”

With Hublot CEO, Ricardo Guadalupe acting as host, Gary and I were invited to a basketball clinic dubbed the ultimate Miami Heat experience along with a few other Miami insiders and a select group of journalists to participate in the event.

The afternoon session began with a brief press conference detailing Hublot’s extended relationship with the Miami Heat and Dwyane Wade. In attendance were Shane Battier and Ray Allen who discussed the impact the watchmaker had on their charities, the team and the community. Later they were joined by brand ambassador, Wade who was excited to share his involvement with Hublot and the lifetime experiences they offered him.

The Ultimate Experience was first of its kind for the Miami Heat and Hublot. And in the ultimate Heat Fashion we were welcomed with game day flare where girating Heat dancers, and Burnie the mascot hit the floor – an introduction from Miami Heat president and coach, Pat Riley and Ricardo Guadalupe, Hublot’s CEO.

A select few including myself opted to participate in a rigorous boot camp style exercise that the Heat players are subjected to during basketball practice. We were taught to dribble, guard and shoot hoops by some of the team’s star players Juwan Howard, Ray Allen, Shane Battier and NBA champion and former Heat player, Alonzo Mourning.

Ending The insider experience we were escorted by Alonzo Mourning inside the secret man cave where all the Heats secrets are kept sacred – the locker room. The vivid pictures of players in their glorious and painful moments on the walls and corridor tell the struggles and victory of the Magic City’s beloved team.

Hublot is the Official Timekeeper and Official Watch of the Miami HEAT.