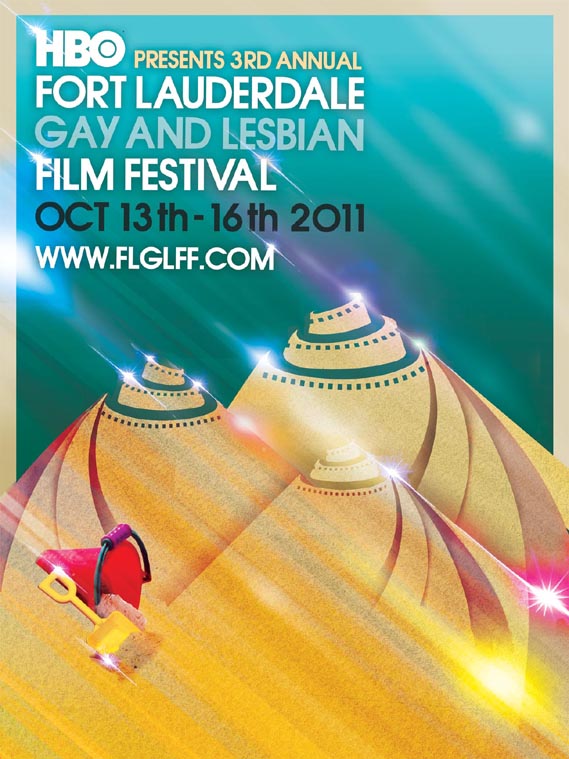 Now in its third year as a stand-alone festival, the Ft. Lauderdale Gay & Lesbian Film Festival is unveiling a dynamic roster of 17 films for the 2011 season, announced Franc Castro, executive director of the festival.  New for this year will be a gala opening night reception and film followed by a VIP after party, plus an expanded schedule of more short films, documentaries and feature films that are by, about, and for the gay, lesbian, bisexual and transgender (GLBT) community and its allies.

“Everyone connected with the festival is truly excited about this year’s line-up,” Castro said.  “We’ve brought together an amazing and diverse mix of films that will appeal to the whole community.  These films will inspire, inform, entertain, and maybe even provoke, but in every case, the festival promises a wonderful time out at the movies for the entire community.”

All screenings will be held at The Manor complex, 2345 Wilton Drive, in Wilton Manors, with the exception of the Opening Night reception and screening, which will be held at Cinema Paradiso, 503 Southeast 6th Street, Fort Lauderdale.

For tickets, membership information and a complete festival schedule, call 877-484-8499, or visit www.flglff.com.

It’s 1987 and Danielle’s misbehavior gets her banished to Special-Ed, where she is paired with Clarke, a friendless, closet-case on a parenting project. Danielle is determined to find her real father and Clarke is desperate to escape being sent to military school by his homophobic dad. They hit the road and on their journey they discover each other, themselves and the ultimate value of friendship.

This film is a Robert Altman-esque take on the lives of different Arab immigrants in Germany and how they handle their Islamic faith with Germans, each other, their demons and their way of life.
5:30 p.m.
The Manor | Ivy Cinema

“So Hard to Forget” (“Como Esquecer”)

After a painful breakup and burdened with unbearable melancholy and memories, Julia struggles in her new life. Suddenly, when hope seems out of sight, she meets Helena, a woman who is going through similar circumstances.
6 p.m.
The Manor | Epic Theater

“We Are The Night”

Louise, the lesbian vampire leader, has been looking for love for centuries.  When Louise sees Lena as the love of her life, she transforms her into a vampire. Lena initially feels lost, but quickly joins the trio of women vampires. When they attack a group of criminals, Police Officer Tom investigates and so begins the hunt for the vampire pack.

“Going Down in La La Land”

Michael and his partner Daniel trade their New York City living for the Connecticut shoreline with hopes of a simpler life. Suddenly their new peaceful life is shaken when one of Michael’s high school students accuses him of “inappropriate conduct.”
2 p.m.
The Manor | Epic Theater

10-year-old Laure moves to a new town where she convinces her new friends she is a boy named Michael. Michael grabs the attention of a particular girl named Lisa, who ends up falling in love with him. When the summer comes to an end, will Michael’s true identity be unwillingly revealed?
2:30 p.m.
The Manor | Ivy Cinema

Patty Schemel, the hard-hitting drummer of Courtney Love’s band “Hole,” always knew she was “different” but never dreamed she would one day be on the cover of Rolling Stone. She also never thought that she could lose it all. This film is an unflinching, inside look at one of the ‘90s most crucial and controversial groups.
4:30 p.m.
The Manor | Ivy Cinema

Marshall is about to turn 30 and is in desperate need for a new life. He downloads an app called “eCupid” that guarantees true love, but immediately sabotages his seven-year relationship. Suddenly single, “eCupid” overwhelms Marshall with sexy guys and quickly becomes out of hand. With the help of a wise and mysterious waitress, Marshall is given one more chance to determine who and what is really important in his life.

As told by the founder of International Mr. Leather (IML) and past IML winners, this film tracks the 2008 IML leather contest held in Chicago.  The film weaves snippets of legend, shots of past IML weekends, clips of seminars, crowd shots and emotions from contestants and spectators as it fairly portrays participants and attendees as “normal” GLBT people simply enjoying life.

Co-Producer Dorjan Williams will be in attendance for Question & Answer directly after the film.

Octavio is a struggling Chilean boxer working as a hairdresser to make ends meet. Hugo is a troubled young man searching for his true self. The couple fall in love and move to the capital city of Santiago with energized dreams of building a life together and protecting their love from a harsh world. This powerful film captures the passionate rise and tragic fall of a couple’s relationship.

“The Grove” is a film about AIDS, love and the politics of remembrance. Thirty years after the first diagnosed cases of AIDS, how do we mark a time of unimaginable loss?

“Life @ the End” looks at life and the power of human connection through the eyes of people caring for their terminally-ill loved ones in South Florida.

A portrait of award-winning country music star Chely Wright, this film follows Wright through her struggles as she discovers the transformational power of living an authentic life.
4 p.m.
The Manor | Epic Theater

As air raid sirens wail, the audience is transported to London in the 1940s where four young people find an invisible arena in which to explore their sexuality. Moving back in time through their lives, loves and losses, they must make peace with their pasts in order to move on to their futures.

“Christopher and His Kind”

Directed by Geoffrey Sax
This film adaptation of Christopher Isherwood’s critically acclaimed memoir gives a fascinating glimpse into the decadent and politically unstable world of 1930s Berlin. A young wide-eyed Christopher escapes repressive English society and arrives in Berlin at a time when the cabaret scene is in full swing. Launched into the thriving gay subculture, Christopher embarks on a journey of self-discovery and love that is set against the vibrant backdrop of Berlin’s cabaret nightlife and the dark rise of Nazi politics.