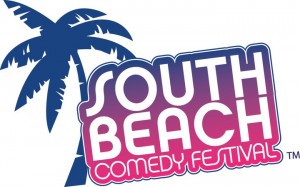 The Sixth Annual South Beach Comedy Festival has just announced its dates for 2011.  Looking to an even bigger and better year, the event will run from Wednesday, March 2nd to Saturday, March 5th.  COMEDY CENTRAL returns as the national media partner and Live Nation as the sole producers of the Festival handling all marketing, PR, talent booking and production.

Now in its sixth year, the South Beach Comedy Festival continues to grow and remains the premiere comedy festival for top comedic talent and fans across the country.  To accommodate the burgeoning audience, Live Nation and COMEDY CENTRAL have added more featured performances in South Beach.

The Free Live Comedy Stage on Lincoln Road will once again offer up outrageous laughs nightly to any and all attendees.  The full Festival roster will be announced in the next few weeks. Tickets for Doug Benson, Adam Carolla, Kevin Hart, Gabriel Iglesias and Wanda Sykes will go on sale on January 15.

“The South Beach Comedy Festival has emerged as one of this country’s premier comedy events, bringing with it all the benefits of tourism, business and great entertainment to Miami Beach and our whole South Florida community,” stated Neil Jacobsen, President of Live Nation Florida, producers of the Festival.  “This year promises to be even bigger and better than before and we are privileged to again be partnering with COMEDY CENTRAL to make it all happen.”

Kia, Taco Bell and Schick are the national sponsors for the sixth annual South Beach Comedy Festival as well as local sponsors the Miami Beach Visitor and Convention Authority, Miami Herald, the IMPROV and Deco Drive.

Now in its sixth year, the South Beach Comedy Festival continues to grow and remains the premiere comedy festival for top comedic talent and fans across the country.  To accommodate the burgeoning audience, Live Nation and COMEDY CENTRAL have added more featured performances.

Once again the Festival will utilize multiple locations to highlight its exciting variety of talent.  Acts will perform at the Fillmore Miami Beach at the Jackie Gleason Theatre, Colony Theater, and for the first time the exciting recently opened New World Center with its unique architecture and outstanding acoustics. The Lincoln Road Stage at Euclid Avenue will also serve as the home to the Festival’s outdoor, nightly, free comedy stage every evening from Thursday,

The Festival begins on Wednesday, March 2nd with two shows by comedian Doug Benson at 7:30PM and 10:30PM at the Colony Theater 1040 Lincoln Road. It would take too long to cite all of Doug’s credits, but here’s a small sampling: He has his own documentary called Super High Me based on a joke from his standup act.  He finished top six in the 2007 season of NBC’s Last Comic Standing. Doug was a series regular on four seasons of VH-1’s Best Week Ever. He makes recurring appearances on ABC’s Jimmy Kimmel Live. His second Comedy Central Presents half-hour special premiered in January ’09. He had the nerve to hit on Jennifer Aniston on the classic sitcom Friends, is a character on The Sarah Silverman Program, and got Larry David in a headlock on HBO’s Curb Your Enthusiasm. If that’s not enough for you, he’s a creator/writer/star of The Marijuana-Logues, a show that’s been a hit in clubs and theatres from Los Angeles to New York – and drew a bongload of rave reviews.  And very soon The Benson Interruption will be a series broadcast on Comedy Central. Tickets are $27.50.

Kathleen Madigan stars in the first SBF show ever at the new New World Center on 17th Street across from the Fillmore on Miami Beach, Thursday, March 3rd at 7PM.  After returning from her second USO Tour of Iraq and Afghanistan, comedian Kathleen Madigan learned she’s entirely too short to be involved in combat and that being in the military is nothing like the commercials on television. As well as trying to look serious in combat gear, she packed this year with more tour dates and television appearances. In addition to performing in theaters, festivals and on talk shows, Madigan, dubbed by Jay Leno as “one of the funniest female comics,” has been tapped for her comedic point of view by Dr. Phil as a special correspondent for The Dr. Phil Show with reports on various topics. She also recently completed writing, producing and performing on Lewis Black’s The Root of All Evil, for Comedy Central. The American Comedy Award winner for “Best Female Comedian” appeared on shows for VH1 and TV Guide Network, The Joy Behar Show(CNN) Wanda Sykes Show and The View. Gone Madigan her new comedy special, aired on Showtime in December 2010 and will be followed by the DVD release in January 2011.  Tickets are $36.50.

Gabriel Iglesias performs Thursday, March 3rd, 8PM at the Fillmore Miami Beach, 1700 Washington Avenue.  Gabriel Iglesias has been described as unbelievably funny, electrifying, and a gifted performer who has the ability to consistently deliver a uniquely hilarious comedy experience – from start to finish – in every venue he performs in. His high-octane show is a sure-fire hit mixture of storytelling, parodies, characters and sound effects that bring all his personal issues to life. Gabriel’s clean, animated comedy style has earned national crossover appeal, making him popular among fans of all ages. Now, more will be able to catch Gabriel live as he embarks on his national standup comedy tour, “The Fluffy Shop Tour” presented by Comedy Central.  Tickets are $33.00 and $37.50.

Adam Carolla performs Thursday, March 3rd, 8PM at the Colony Theater.  Adam Carolla is one of the most versatile men in Hollywood.  He started The Adam Carolla Podcast with only a computer and a microphone from his home office in Feb. 2009. A year later, the podcast had been named iTunes #1 Podcast Of 2009 and receives more than five million downloads a month. His immediate success prompted him to launch an entire online network, ACE Broadcasting in February 2010, which produces many of iTunes top podcasts.  Currently, Crolla has landed himself on New York Time’s Best Seller list with his book, In 50 Years We’ll All Be Chicks filled with his famous rants.  Earlier this year Carolla was seen as a contestant on ABC’s hit reality series Dancing with the Stars. Additionally, he has hosted Comedy Central’s Too Late with Adam Carolla and starred in TLC’s The Adam Carolla Project, which chronicled the renovation and subsequent sale of his boyhood home. With their partner Daniel Kellison, Carolla and Jimmy Kimmel are the heads of Jackhole Industries and have created and starred in two hit Comedy Central shows, The Man Show and Crank Yankers.  Tickets are $36.50.

Wanda Sykes performs Friday, March 4th, 8PM at the Fillmore Miami Beach. Wanda Sykes has been called “one of the funniest stand up comics” by her peers and ranks among Entertainment Weekly’s 25 Funniest People in America. Her smart-witted stand up has sent her career in many different areas.  She is currently hosting her own late night talk show, airing every Saturday on Fox. Last October she premiered her second HBO stand-up special and she is currently starring as “Barb” on the CBS comedy THE NEW ADVENTURES OF OLD CHRISTINE. She was last seen in her HBO comedy special WANDA SYKES: SICK & TIRED and was nominated for a Primetime Emmy for Outstanding Variety, Music or Comedy Special. It was taped before a live audience at the Moore Theatre in Seattle, WANDA SYKES: SICK & TIRED, features material from her recent national tour. Among the topics covered are: politics, gay marriage, karma, healthcare, racial profiling, the pressure of being a woman and the perks of getting older.  Tickets are $46.50 and $66.50.

Bill Burr will be performing two shows at the New World Center, Friday, March 4th at 7PM and 10PM.  Burr first gained notoriety for his recurring role on the second season of Chappelle’s Show. It helped him developed a comedic style of uninformed logic that has made him a regular on the Late Show with David Letterman and Late Night with Conan O’Brien. Burr is touring theaters across the country with the new show, Bill Burr: You People Are All The Same.  He premiered the new show in July with a critically-acclaimed week-long run at the prestigious Just For Laughs Festival in Montreal.  Tickets are $37.00.

Mad Cat Theatre Company’s “The Preservation Society” on Friday, March 4th, 7PM and 9:30PM Backstage at the Fillmore Miami Beach, entrance on 17th Street.  Founded by Paul Tei in 2000, Miami’s Mad Cat Theatre Company is committed to creating an outlet for young people looking for an alternative to the numbing of clubbing, bad blockbuster movies and your

mom and dad’s tired old theatre.  Written and directed by Paul Tei, “The Preservation Society” tells the tale of Polly Chekhov, a comedy writer in Hollywood CA, comes back to Hollywood Florida for the wake of her beloved grandmother Mary. It is left to her to write her grandmother’s eulogy, however a peculiar set of distractions that include a bassoonist, her eccentric family, and a chorus of Deconstructionist, keep Polly from finishing.  General Admission tickets are $31.00.  There is also a VIP ticket available with reserved seating for $67.00 that includes admission to the after party.

Kevin Hart performs Saturday, March 5th, 8PM at the Fillmore Miami Beach.  Kevin Hart has burst onto the scene as one of the most versatile comedy actors in film and television. He can most recently be seen in Death at a Funeral, a remake of the British movie of the same name, alongside Chris Rock, Tracy Morgan and Martin Lawrence. In January 2009, Hart premiered his new one-hour comedy special I’m a Grown Little Man on Comedy Central. The special debuted as one of the highest rated specials for the network. He recently took over as host of BET’s classic stand-up comedy series Comic View: One Mic Stand when the show re-launched in 2008. With his passion for stand-up, Hart continues to tour the country to sold-out audiences.  Tickets are $45.50 and $55.50.