Founded by Inffinito in 1997, BRAFF Miami was the first film festival created to showcase Brazilian movies only, outside of Brazil, and ever since, many others have followed its pioneering efforts. The 2013 program includes more than 20 short and feature films to be shown during an 8-day event in Miami Beach Florida from August 17 – 24, 2013.

The festival will open on August 17 with the documentary on Japanese Brazilian artists West Encounters East, by Executive Producer Stella Homes, at the Miami Beach Cinematheque which will also host Cinefoot – A World Cup Tribute, a special presentation that includes a variety of films dedicated to soccer. Zico in the Net is a documentary about the career of Zico, top football scorer of the Maracanã’s stadium in Rio de Janeiro, illustrated by the goals of the kindly called “Galinho” and by his own personal collection. While Heleno, directed by José Henrique Fonseca, tells the story of a great soccer player from the 40s, played by actor Rodrigo Santoro.

The competitive screenings will take place at the Colony Theatre, starting August 24 with the international premiere of My Mom Is a Character. The comedy about a middle-aged and lonely housewife took more than four million people to the theaters in Brazil this year, since its debut. Another Brazilian top box office movie, Head Over Heels 2, directed by Roberto Santucci, takes the funny and successful executive Alice to New York, to open her first adult store in the US. Other US premieres include the comedy,The Test, directed by Pedro Vasconcellos, and the drama Collect Call, by Anna Muylaert. Award winning actress Fernanda Montenegro is the star of The Lady from Estacio, short film directed by Eduardo Ades.

Closing the Festival, Reaching for the Moon, by Bruno Barreto, will make its Florida debut on August 24. The movie tells the love story of Elizabeth Bishop – the great American poet, who won the Pulitzer Prize in 1956 – and Lota de Macedo Soares, Brazilian female entrepreneur. 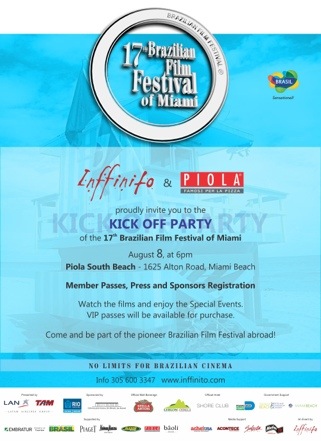