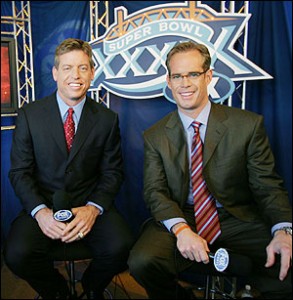 Below are sound bites from the interview.

Aikman on how much importance is placed on the quarterback position:
“A lot of people are involved in winning a game and reaching the Super Bowl but the quarterback is the one position that takes ownership of the trophy. He is the one who is looked upon in a, ‘he has won a championship or he hasn’t,’ way. That isn’t lost on any quarterback. We know that from a very young age. When you go back to college, a quarterback who is a Heisman Trophy candidate can’t lose a game and still be in the mix. Running backs are not held to quite the same standard. That’s the nature of the position. I never tried to fight that as a player.”

Aikman on Ben Roethlisberger and where he ranks among elite quarterbacks:
“Would it elevate his stature to win another Super Bowl? I would certainly think so. Where is he with regards to other quarterbacks in the league? He’s said himself that he won’t be recognized amongst the game’s best like Tom Brady or Peyton Manning because he doesn’t put big numbers. This year, he would’ve thrown for over 4,000 yards had he not missed the early part of the season. When people look at the Steelers, they don’t necessarily dismiss what Ben’s done, but they feel he has a lot of key components around him – a great defense, an emphasis on running the football. While those things are true, they’re true for all winning quarterbacks. I don’t know why some have been reluctant to give Roethlisberger his due. As a former player and someone who appreciates the position, he’s as big a reason as to why this team is where they are as anyone on that team. They are not winning in spite of him. He’s a great player.”

Shanks on whether a Super Bowl on cable television is in the future:
“I don’t think in the foreseeable future, but who knows 10, 15, 20 years down the line. The line is being blurred between over-the-air broadcast and cable. There’s a generation growing up today who probably has no idea what over-the-air television even means because they or their parents just get a bill in the mail every month and they pay it. I think the economics for the foreseeable future will keep it on broadcast television.”

Buck on discussing the NFL’s possible work stoppage during Sunday’s Super Bowl broadcast:
“It’s not something I’ve thought much about. If we’re talking about a work stoppage, we’re not going to have a good Super Bowl. You hope the game will carry the day. That’s something better left for pre and postgame. When people tune in across the country, they’re celebrating that game or watching for the commercials. To get into that and to do it justice without boring people or going on forever, is impossible. It’s like the steroid issue in baseball. How much of that do you want to do in a game during an at-bat and how can you tell the full story without droning on and on and not covering the game?”

Buck on doing a game with such a large audience:
“If you’re doing a game in Week 8, typically you’re doing it for fans who know the teams really well. When you do a game like the Super Bowl, you have to scale it back and get back to some of the older stories that maybe you have already said before. You have to do it tactfully and you can’t do it in a way that’s insulting to the hardcore viewer. You have to go back and get to the story of why these two teams are here. How did the Green Bay Packers start the season, or losing their starting running back on opening day in Philadelphia. Some of the basic things that even going in the NFC Championship Game you take for granted that people know. It’s something I’m very aware of as I prepare for this game and cut some of the clutter out of it. To be a little more general as we get more people into the tent watching this game.”