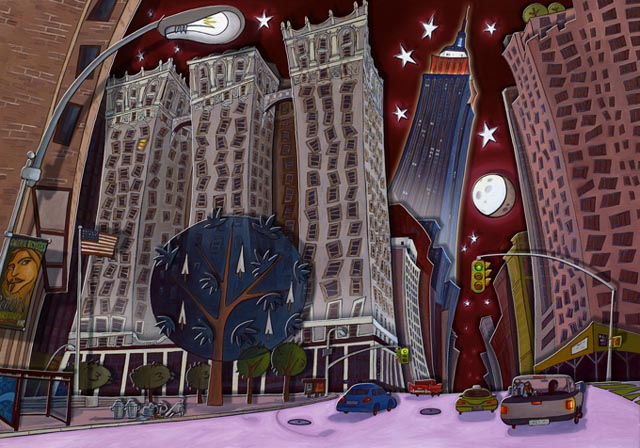 BildoReliefo is an exclusive technique created by Godon that combines the classic form of oil on canvas with 21st century digital technology. To create these dramatic pieces the artist revisits his original paintings, and digitally adjusts the colors, shadows and light, forming the impression of an image in relief. Then a high-resolution single print is made of this new, original work of art. Finally, the printed art is adhered to an aluminum surface before being hand-signed by the painter.

“I look forward to introducing this unique and talented artist to the South Florida community,” said Bernard Markowicz, President of godonAmerica. “The art world in Europe already has embraced his work, and I believe that Godon’s colorful paintings which are pop art expressions of life, will be well received in America.”

In his paintings Alain Godon portrays the essence of a city – its people, culture, monuments, and architecture – and then uses his playful imagination to infuse his work with expressive lines and rich vivid colors. His signature style has been known to subtly include humorous caricatures of his wife, his dogs and himself into most of his pieces.

Godon has painted the sites and captured the spirit of Paris, New York City, Amsterdam and Le Touquet, a beach resort town in the North of France, and soon adds Miami to his prestigious list.

Bernard Markowicz, former Director and partner with the prestigious international group Opera Gallery, founded godonAmerica in November 2009. Several years ago, while traveling with his son to the elegant beach resort of Le Touquet to share his family’s history, Markowicz discovered the brilliantly colored and captivating paintings by Alain Godon. As an avid art collector Markowicz recognized the success that Godon was receiving in Europe, and decided to bring his work to the States. Now, as CEO of godonAmerica, Bernard Markowicz is the exclusive publisher of Alain Godon’s limited edition series for the Americas.