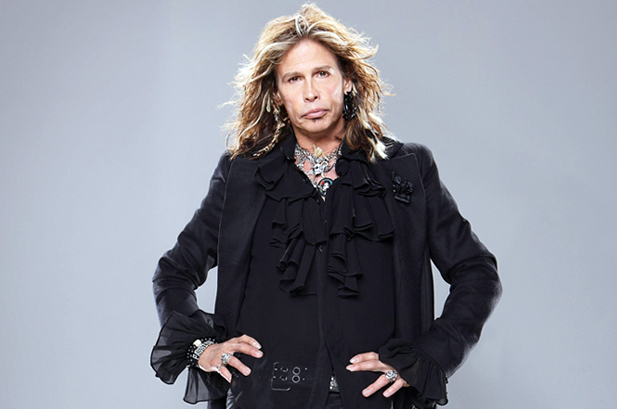 There once was a man from Kent who has one so long that….no I would not go there.
_Steven Tyler

Aerosmith’s frontman and dancing bear, Steven Tyler was in high spirits when he joined the conversation to promote American Idol. You can be sure this is the personality he will bring to American Idol. Tyler has no intentions of being harsh-tongued or too attached to the contestants or kids as he politely refers to them.

The American Idol audience will see a side of Tyler as if he were at home with his kids, not the Aerosmith’s side as he refers to it as being dark and ominous. On Idol he promised to be more open, vulnerable, honest, more in the moment and less colored by the songs he wrote.

In his judging style, he is also sympathetic towards the contestants.
“I listen to these kids regardless if they have walked the gauntlet or not in order to get their start. I remember what I had to go through before I was ever allowed through the doors of this club. It is an incredible thing to be able to come out with the scars that causes me to have character. If they are good to begin with, I am hoping to see that, ” he said.

Kerry Underwood and Kelly Clarkson are his all time Idol favorites.

In the interview, Steven recalls several contestants singing “I don’t want to Miss a Thing” of which he gave a brief rendition. It was definitely a delight to hear him talk with such enthusiasm about American idol. Although he is having fun on Idol, he also reminded us that Aerosmith is his first love. While working on American, Steven will be working with his band for their upcoming tour in November set for South America and Japan and a new album.

“Everything you hear is a lot of hearsay and a lot of muck that is being thrown around and no validity to it. What you hear in the press about Aerosmith getting in the way of American idol – it just isn’t so,” he stated.

Steven Tyler is in it for the long haul.
“I have more than a year contract, but as you know things are what they are. If anyone has anything bad to say about me this season, it will get better next season.”

During the interview, the new American Idol judge joked about having his own show, “Message In a Bottle,” his recovery from drugs and alcohol abuse and regrets on American Idol.

Will he bring the harmonica out this season? Watch season 10 of American Idol to find out.

AMERICAN IDOL returns for its 10th season with a two night, three hour premiere in two weeks, on Wednesday, January 19th, and Thursday January 20th at 8/7C on FOX.

What kind of judge are you, and what special qualities will you bring to American Idol?

Steven Tyler: I will bring a Rock and Roll element to the show which is my personality. I have a good ear for all music, that is why I thought I would take this. It is not just a one type phase judging. I am good for all different music and listening to voices and the spirit of and the imperfections of someone’s voice. Not all great singers make great rock stars. Some of the voices that aren’t the best make great rockstars.

I am taking what these kids give me – cutting it up in three (3) different pieces;
(1) Can they sing a mean pitch?
(2) Do they have character?
(3) Do they have a star quality about them?
Folded all into one, that would be my expertise. I think I am going to take it up a notch.

I am not going in there to be a harsh judge or an overly bearing judge. I am just bringing my Italian I know how to work a room Aunt Phyllis honesty – 40 years the front guy in Aerosmith who judge the hell out of himself. I made a good career out of it. You will see a love affair, camaraderie you have not seen in 10 years. I am really happy that I get along with Randy so well and J-Lo is a fox. She is also streets with a good big heart. We have seen a lot of people this year, and we have got our top 40, so we are ready to go.

I have an identity with this band (Aerosmith) and all the videos I have done, I framed it would be a shoe in. The part that is a little difficult is judging young kids that I think they all have voice, but actually being honest and open. It took me a couple minutes to get in the the role of that, but I have grown accustomed to it and it is fun. I get to sit next to J-Lo and Randy taking a you know what out of everybody. I don’t take whatever happened to me this morning, last night, with the band or my exes into judging kids, like some other people might have. I take what I have grown up with which is being a very harsh judge of myself, my own vocals, my band and I lay that across the talent that comes across my view.

Do you have any regrets in your life and on American Idol?

Steven Tyler: In my personal life, I have no regrets. Everything that came my way has cut me into what I am today. What I am today, is a grateful recovering drug addict – alcoholic. I am not without my faults, my marks and my scars. I am proud of them. I have showed people them – I have for 40 years, that is why they love my music, because I am honest and I have no regrets. This have been good, but after Howard Stern, life will never be the same for me nor will it be after the premiere of American Idol. I am always ready to take it up a notch. It used to be my frivolity but now I am addicted to adrenaline. I still like a good challenge and i am always with the best people – with the best network, I get to meet all these FOX people. Someday I am going to have my own show called Different Type of Survivor – I don’t know. They will put me in a bottle and throw me into the ocean to be called “Message In a Bottle.” Put me in a giant bottle and see what shore I land, then I marry the person, and we will see what our kids look like. I don’t know, but I am ready for anything and nothing is being more convincing that I am ready for anything than this past year with Aerosmith.

As for regrets on American Idol, I made some harsh comments the first week and they snapped back saying, “What do you mean?” There were only two of those, because I didn’t want that to happen again. I couldn’t tell them they were no good without substantiating why. A couple times I said, “You just don’t have it.” They did asked me, “Why?” I could not tell them why. I am looking for that certain something while I heard that certain something in a negative way. I didn’t see the star and I did not have the guts to tell them that. I have not been watching the show and I was not versed in that type of judging. It was hard for me. After that I was ready to go and I jumped back in both feet.

It has been fun. I don’t take this too seriously, and I take it real seriously. It has been a real hoot for me.